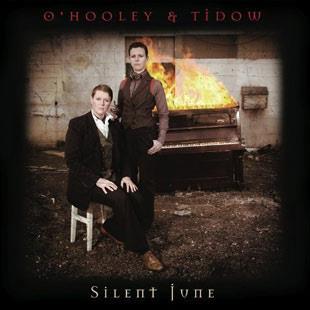 It took a couple of listenings to ’Silent June’ for me to penetrate O’Hooley and Tidow’s album properly. I’ll freely admit that I am not the biggest fan of piano-based music, and that I was concerned the album would be rather Unthank-esque after Belinda’s involvement with the Winterset. However, having immersed myself for a time, I found that there are some real gems to be enjoyed here.

The larger part of the album consists of self-penned tunes, with two traditional tracks making an appearance. ’Spancil Hill’ is a wonderful tale of an Irishman yearning for home from California, and includes Jackie Oates on fiddle. The other traditional track is ’Banjololo’, an old children’s song. The silly little ditty is a treat, and an enjoyable change of pace on what is quite an emotive album.

The self-penned somgs contain powerful melodies and harmonies, as well as sone striking lyrics. ’Cold & Stiff’ is dedicated to Chumbawumba (Neil Ferguson mixing and mastering this album), and their influence is plain both musically and lyrically. Even my small and shrivelled rebellious spirit was stirred by the suggestions of suffocating in everyday life.

Very different but equally emotive are my two favourite tracks from ’Silent June’. At nearly eight minutes, ’Too Old to Dream’ is the longest track of the album and reminds me in a small way of an equally long track, ’Bohemian Rhapsody’. No, Belinda and Heidi do not rock out, but they do draw influence from a range of sources, producing a magpie track that is simply beautiful. The lyrics truly touched me, as we hear of an old lady in a care home, and the inclusion of the sample of Irene Rourke at the beginning brings a reality and poignancy.

’One More Xmas’ is in many ways a much simpler track, although lavished with a string quartet to great effect. What makes this song so great is the absolute sincerity of the chorus. With the piano and strings propelling the listener through the song, it is a wonderful track to drive to, but underneath is the simple sentiment of love for a mother.

Where Belinda and Heidi strike gold on this album is when they sing of the collective feelings of humanity: love, loss and the bit in between.

Released by the No Masters Cooperative on 22 February 2010.