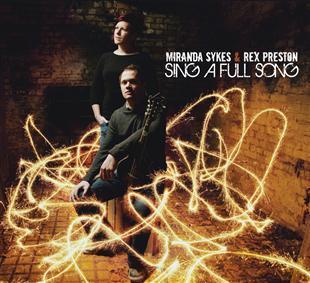 Miranda Sykes is of course well known for her work with the band Show of Hands, and Rex Preston was once a member of the band Scoville Units before joining forces with Miranda to form this duo. They both have an extensive musical history which gives a feeling of maturity and wisdom in their tunes.

This album, Sing a Full Song, is their second and likes to dabble amongst more than just the folk genre, giving us hints of bluegrass and acoustic just to help keep things varied and lively.

We get with this duo a less common musical combination of a firm double bass and a sporting mandolin, giving us a plucky set of tunes that embrace the talented vocals of Miranda Sykes.

We get a wide spread of themes and lyrics in these songs but it is more about the sound of the voice on this album (although the lyrics are entertaining, particularly in Lady Isabel & the Elf Knight). The most memorable thing about this album is how much it grips you and keeps your interest throughout each set.

Some musicians tend to go with set tune patterns which over all can risk becoming repetitive, but Miranda and Rex do a fantastic job of varying themselves on each song so everything sounds fresh. Adding to this is the swap of lead vocals to Rex during tracks such as How Soon How Long and Slowin’ Down.

I certainly hope that these two continue to work strongly together as it is clear they have much more to offer the music world.

Released by Hands on Music 2013