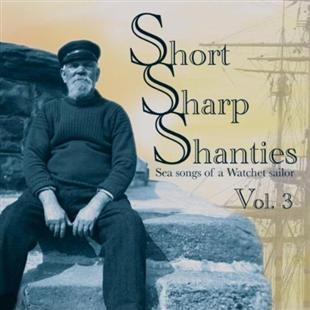 Shanties by their nature are a little repetitive, so the compilation’s variety of arrangements is welcome. Rosabella is a lovely introduction: Sam Lee’s rendition is lit up by some bright harmonies and lively acoustic guitar.

It’s easy to imagine some of the songs being sung as ropes are hauled about by sinewy sailors. Keith Kendrick - who has a little of Mike Waterson about him - puts in some lusty performances. Jim McGeean has a pleasingly accented delivery, too: his rendition of Liza Lee is infectiously catchy, delivered with a bouncy concertina accompaniment.

But it’s far from a blokey ensemble. Barbara Brown sings with authority and Jackie Oates is luminescent as usual. She puts her all into a lusty performance of Hog-eyed Man. It’s still rather a surprise to hear her accusing “Mary-Anne and Sarah-Jane” of being “the two biggest whores in White Moor Lane”, though her delivery is rather sweeter on Do Let Me Go.

There’s a nice mixture of familiar and less well-known songs. Lee’s rendition of The Bull John Run is unexpectedly jazzy and it’s unusual to hear a shanty version of Bully in the Alley, though the latter is a little wearing - the listener might be glad of a captain’s instruction to help pass the time.

But such a comprehensive series is bound to have a few peaks and troughs, and there are plenty more gems to discover: some nifty banjo on Jeff Warner’s He Go, She Go, Lee’s sturdy delivery of some salty content on Haul Away Joe, and a suitably mournful Lowlands. It’s an enjoyable, varied listen, great source material, and a fitting conclusion to an impressive tribute to Short - and Sharp.

Released on WildGoose Records on 21 May 2012