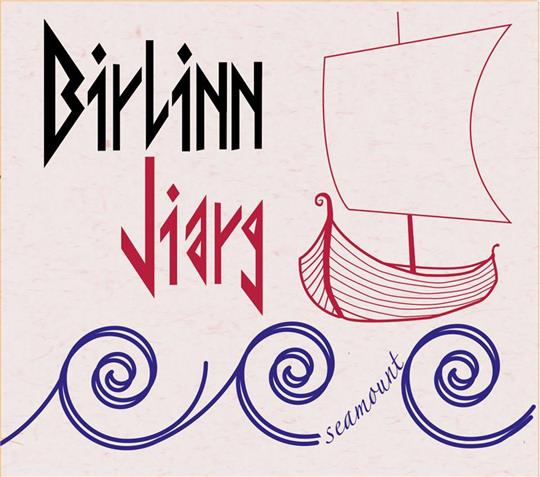 Seamount, the debut album from instrumental quartet Birlinn Jiarg is a slow burner that gradually grows into an uninhibited love-song to Manx music. Featuring both traditional Manx tunes and originals by the founder of the group Beccy Hurst, Seamount is a deft mix of the old and the new, delivering something fresh without losing sight of the heritage that forms its foundations.

The opening track, End of the World, is a pair of traditional Manx tunes, Juan Y Jaggad Keeir and Jerry ny Thehill. It’s a nice and easy start to the album, with Alasdair Paul on guitar providing a layer of warmth to the whistle melody.

Again, the second track, Sunnydale, starts you off slow and steadily builds as it moves between its three constituent tunes. The last of the three, Gawne’s School of Navigation, is a particular highlight, not only of the set but the whole album. It’s a tune of an appropriately sunny disposition. It’s also penned by Hurst, and is the first real indication that she’s not just got a talent for writing catchy tunes, but a real spark for invoking traditional music without simply repeating it.

Other highlights include the wistful Our Ship, a pair of traditional tunes, one an air and the other a Manx lullaby, that captivate with their simplicity. Happy Valley is another appropriately named set, starting with the airy whistle tune The Beetroot Reel (the one tune on the album written by band member Freya Rae) and finishing with Hurst’s Happy Valley, where the whole band comes together for an understated but joyous finale to the set.

Seamount is a wonderful blend of traditions, and listening to it is simple pleasure. The performances are clearly born of great talent, and the writing even more so. Manx music is under-represented in the UK folk scene, but a group as talented as Birlinn Jiarg could do an awful lot to remedy that.