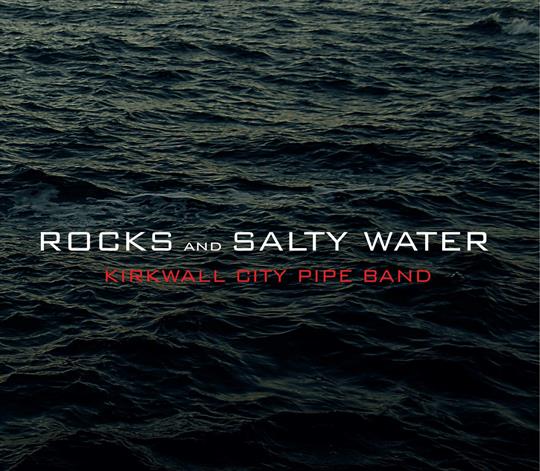 On 23 November 1919 a pipe band was formed in Kirkwall to commemorate the first anniversary of the World War I armistice; exactly 100 years later their current line up released the third album of the band’s discography. Rocks and Salty Water is not the average pipe band album: it includes not only competition sets but also some surprising renditions of both folk songs and traditional tunes with a modern flavour with pipes, and sometimes snare drums, joining instruments like guitar, piano and fiddle.

The full pipe band sets are performed with thriving energy and clinical precision. Among those Duncan McInnes’ MSR, which they played at the 2018 European Pipe Band Championships, the sparkling and diverse Eggman Medley and Cosmos Medley, a set including a hornpipe, a slow air and three jigs, deserve a special mention for the ingeniously smooth transitions between tunes with different signatures.

However, the songs are the strength off this release, they are delivered by Duncan Hill’s mellow voice on contemporary and yet suggestive arrangements. For example, their take on the poetic Hope to See, a song about human condition and the flowing of time by Orcadian singer Kris Drever, featuring a stunning and poignant final pipes and choir section and the closing track, Runrig’s Going Home.

Other highlights include Smallpipe Set, a track in which some classics of Scottish piping are performed on two smallpipes sets on a dynamic substrate, and inisheer, the band’s interpretation of a tune by Irish accordionist Thomas Walsh.

One of the things that strikes the most while listening to this album for the first time is the versatility of the members of the band: they are pipers and drummers, and yet there are a lot of other instruments in the songs’ arrangements such as Stewart Shearer’s guitar or Andy Cant’s fiddle. Moreover, they truly manage to leave their own recognisable mark on them; the best example of this is the unusual bass and drums driven backing on which Pipe Major Laurence Tait performs his unadorned but touching pipe solos in Going Home.

The mixture of well-coordinated competition medleys and appealing songs distinguish this album from the great majority of pipe band works: this is why Rocks and Salty Water stands both as a release for true pipe band fans and as a great introduction for the neophytes of this complex form of art.

Released on CD and digitally on 23 November 2019