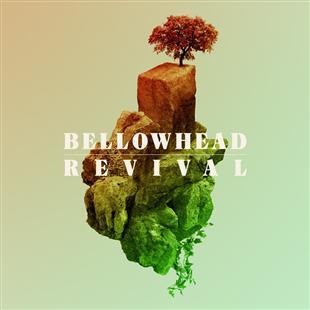 Over the past decade, Bellowhead have gone from strength to strength. They have released four albums to, pretty much, universal acclaim and have helped push folk music back to the mainstream on television and radio. What can be left for them to do after playing a joyous, sold out, birthday gig at the Royal Albert Hall?

Move labels to Island records and release a pop album?

Well, not really. Revival is still a Bellowhead album through and through but refracted through the sensibilities of producer Rupert Christie who has worked with Laurel, Ian McCulloch and Port Isaac’s Fisherman’s Friends. The album makes for a fascinating and enjoyable forty-two minutes of listening.

Revival opens with a brace of sea shanties arranged by lead singer, Jon Boden. Let Her Run and Roll Alabama are familiar territory for Bellowhead. Both songs have a strong sing-along chorus and a driving propulsive beat. What is different from previous releases is the prominence of drums and the overall bright sound. These two sea songs get the album off to a cracking start.

Fine Sally is the first of three pieces arranged by Pete Flood. This tale of spurned love is dark but is set to a jolly tune which deftly evokes the joy of the lover dancing on the grave of the woman who rejected him.

Drinking songs have always been popular in folk music. Let Union Be is a party song, celebrating the joys of good food and drink. The arrangement has a faintly Caribbean feel which features some deft melodeon work from John Spiers.

Things take a left turn with Moon Kittens. This is Flood’s setting of the nursery rhyme, We’re All in the Dumps. Flood takes as his starting point James Barry’s scores for the Bond films and the lounge music craze of the 1990s. It’s exotic and a little bit sexy, reflecting the surreal nature of the lyrics. A definite album highlight.

Flood’s final contribution to Revival is Rosemary Lane. This variant of Scarborough Fair starts off at a cracking pace and never lets up. The simple tune of each verse is thrown into relief by the manic intensity of the arrangement, which gets wilder as Boden sings about the impossible tasks a suitor has to perform to win the heart of their prospective lover.

Gosport Nancy was one of two new songs premiered by Bellowhead at their birthday concerts in Manchester and London. This upbeat number was a hit with both audiences and it’s no surprise that the song was chosen to be the first single from the album. It’s a song guaranteed to get a crowd bouncing.

As if to cement Bellowhead’s relationship with their new label, Jon Boden has arranged the Richard Thompson classic, I Want to See the Bright Lights Tonight (originally released on Island in 1974). The arrangement is fairly faithful to Thompson’s version and is a fitting tribute to a folk icon.

The Seeds of Love is another tale of unrequited romance. This is perhaps the most difficult song to grasp on first listen, full of tricky time signatures and jazzy chords. Jon Bode, sings the piece with conviction and repeated listens bring out something new each time.

Sam Sweeney has contributed a most unusual version of the hornpipe, Jack Lintel to the album. For half its length the tune develops as normal, with different instruments taking the lead. The final part of the piece sees the tune broken up with phrases overlapping and repeating themselves, almost in the manner of minimalist music by Philip Glass, or the group Spiro. It’s a bold experiment that pays off.

The final track is Greenwood Side, also known as The Cruel Mother. This six minute song is the tale of a high born lady who murders her two babies to preserve her good name, only for her to be haunted by the ghosts of the dead children. It’s a stark ballad held together by a riff played on fiddle between verses which gradually comes to dominate the second half of the song. A downbeat note with which to finish the album.

So, what to make of this new sound? It’s certainly there in songs such as Gosport Nancy and Alabama Roll which are short, punchy, pieces of folk-pop. However, there’s still a dark side to the band which is populated by tales of lost and rejected love, dead children and foul murder.

It’s this balance that makes Bellowhead the band that it is, and this album another milestone on a journey to, well, who knows where?

Here’s to the next ten years.

Released through Mighty Village / Island Records in the UK on June 23rd 2014.