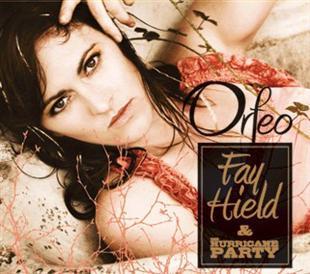 For the follow-up to her successful debut album, 2010’s Looking Glass, Fay Hield has beefed up her backing band. Rob Harbron and Sam Sweeney are joined by Jon Boden, Andy Cutting and (on a few songs) Martin Simpson, to form The Hurricane Party.

It makes for a fuller, more nuanced sound and a record full of dazzlingly complex, hearty arrangements. And despite the perhaps intimidating wealth of talent behind her, Hield’s distinctive voice is plenty strong enough to take command of the songs.

And it’s an interesting collection, too. Hield, who has completed a PhD thesis in English folk singing since her last album, has chosen a set of lesser-known songs. Opener The Lover’s Ghost (not a familiar version to these ears) is a strident start, lit up by Simpson’s banjo. The jaunty Wicked Serpent - “a massive hit in Massachusetts”, apparently - has an almost comically tragic ending. And the epic title track is more than worthy of its status - an engrossing, magical tale built around a catchy motif and a sing-along chorus, based on the Orpheus myth.

A more familiar number comes in the shape of The Cuckoo, based on Anne Briggs’ version. Hield and the Hurricanes create a remarkable sense of stillness - the eye of the storm, if you like. Elsewhere, she confidently leads the chorus on the more stripped-back Pretty Nancy.

While the collective’s upbeat songs are very enjoyable - there’s some great fiddling on the sprightly The Parson’s Gate, and The Old ’Arris Mill is sure to become a live favourite - the group suit the bleaker tracks magnificently. The melancholic shimmy of The Weaver’s Daughter is a highlight, while Harbron and Cutting, on concertina and melodeon respectively, combine beautifully for the sombre closing tracks.

The disquieting stillness returns for Henry, which seems to be a close relation of incestuous Child ballad Lucy Wan. And chilling nursery rhyme Naughty Baby (the tune of which is inspired by the theme to I’m Sorry I Haven’t a Clue but is bizarrely reminiscent of the German national anthem) really winds up the intensity as it unfolds.

Orfeo is a refreshing, accomplished record, with Hield at its heart. The Hurricane Party are excellent foils - the album is exquisitely arranged - but from its smouldering cover shot to its thoughtful philosophy (and of course, that voice) this is Hield’s album, and it’s evidence not only of progression, but of striking talent. A triumph.