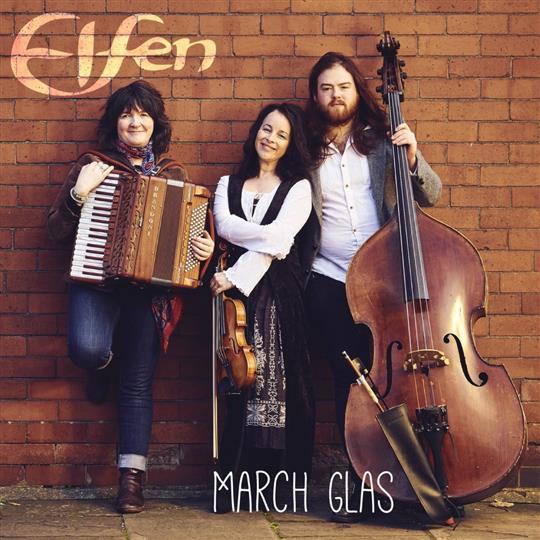 The emergence of a number of Welsh bands into the mainstream of folk sees the Elfen branch joining the mainline. The Welsh word for ’element’, Elfen are the trio of Helina Rees, Jordan Price Williams and Stacey Blythe, incorporating fiddle, whistle, double bass and harp.

Their mission of “reimagining the traditional” is hardly a new concept, in fact some could argue that’s what the vast majority of folkies do, yet in their case, the ancient tunes and songs of Wales are at the core. Old words and new tunes, mixed in with traditional music from around the world are given the Welsh spin with a nod to their heritage by keeping true to the Welsh language.

There’s a pervading ethereal quality to March Glas, typified by the elegant opening which could easily evolve into string quartet territory, before leading into Bwlch Llanberis where Helina Rees’ fiddle provides a familiar Eliza Carthy judder and delightful light vocal that dances alongside.

The pair of jigs - both the Greek and Macedonian referenced - sway along in a similar fashion until As Chwarae takes over in a much more gentle vein, the harp and fiddle vying in competition to see who can provide the more genteel element.

Wals Maria allows the harp to take the full spotlight on centre stage in a musical box lilt. Not for the only time on March Glas, it’s a case of holding the breath to catch the care and attention to detail.

The Williams double bass features unaccompanied at the start of A La Court, where the fluid notes ease from the fretless neck until a sprightly vocal is followed by fiddle, awakening to form a knee-tapping, shoulder-swaying workout; an exercise in restraint, a catchword for the whole album. A tad of boldness makes its presence felt in America while the travelogue heads to the Mediterranean in the Gallic feel of Aderyn Du.

One small note and pat on the back for the band and their engineer in Dylan Fowler, whose commitment to recording live achieves a notable clarity particularly in the space of the arrangements and some of the vocal harmonies that sets the tone for musicians who grind out studio performances.

Lyrically, the Welsh may render many of the messages redundant, but the chance remains to appreciate the vocal nuances and of course, music is a universal language. One that with March Glas, Elfen demonstrate that they are most conversant.