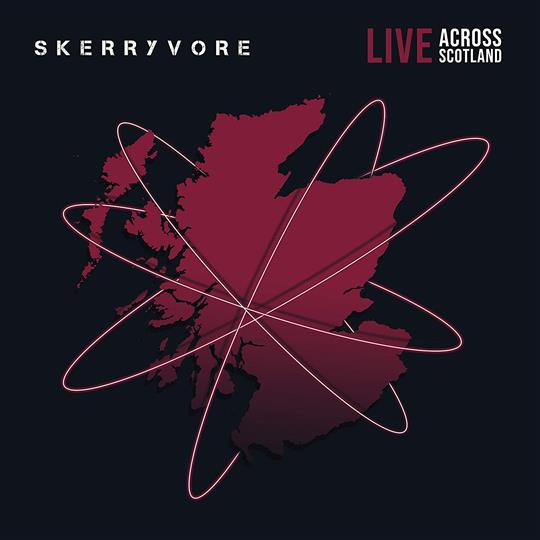 Between 2019 and the first weeks of 2020 Skerryvore were out on tour around Scotland to celebrate the fifteenth anniversary of the foundation of the band, enchanting their devoted fans and a lot of new aficionados with their peculiar sound and irresistible energy onstage. They collected fifteen tracks, one per year, on Live Across Scotland, a collection of some of the most memorable moments of their tour, recorded in various locations and mixed by Ron Cook.

The verve of their studio albums is reflected in their live performances, as proved by this collection. It is in their instrumental medleys that the band reaches the highest peak of virtuosity and effervescence: take for example the opening track Trip to Modera, an engaging accordion and bagpipe led old favourite that the audience seems to appreciate very much, or the stunning The Rut, a bagpipe and electric guitar driven medley encapsulating the soul of Skerryvore’s musical experimentation.

In a decade and a half the band has grown so much and gone very far, both musically and geographically, building a vast and loyal fan base around the world. One of the key factors for their success is in the avant-garde settings of their songs, their unique ability in blending the traditional soundscapes of their native region with elements from various other genres, such as rock and country. This collection includes many of the milestone songs of their career as a band: from Can You Hear Us to Hold On, from The Last Time to Path to Home.

The breath-taking electric guitar passage in Solo: Live Forever and the first tune, a haunting slow air, in Soraidh Slan and The Rise represent two juxtaposed meditative moments in an album packed with fire and energy.

At a time in which live music seems both a remote memory and a distant goal, we cannot be grateful enough for an album that, with passion and vibrancy, brings the infectious atmosphere of a Skerryvore gig directly to our living rooms.