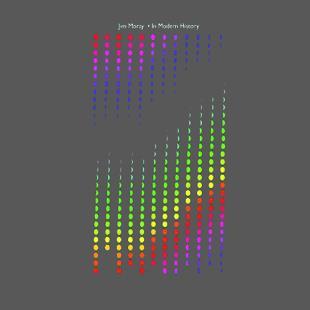 In Modern History has to rate as the most anticipated album of the year so far. Jim Moray has returned with another signature album of folk with an experimental twist that is sure to please his fans and get tongues wagging.

This album certainly nods at times to the musical influences of Jim’s youth, channelling a grungy Placebo sound in Bristol Harbour, and the synth line from Toto’s Africa makes an appearance later in the album.

William Taylor also does a good job of promoting Jim as the next James Bond theme composer, with guitar and brass section, not to mention one of the funkiest hurdy gurdy lines I’ve ever heard.

But if my comments so far may sound gimmicky, it is wrong to look at this album entirely from those points. Striking as they were to me when I first put the CD on, the variety and musicianship on display show a legitimate and accomplished work.

Guest vocals from Hannah Peel and Jackie Oates add a wonderful depth to Jenny of the Moor and Hard respectively, whilst the instrumental variety of the album keeps the listener’s interest. Coming to the fore are electric guitar, mandolin, hurdy gurdy and glockenspiel.

Of particular note is Spencer the Writer (not available on the Songlines release), which sits somewhere between Jim’s version of Lucy Wan and Blur’s Parklife: a wonderful re-imagining of the tale and the man. Eddie Argos does a wonderful job of delivering the sparkling lyrics.

Home Upon the Hill is the other track not available on the cover-mount edition of the album. It is a glorious soaring number that makes one feel unashamedly high. Thoroughly recommend as a pick me up.

In stark contrast is perhaps my favourite track of the album, Long Lankin. The tale in itself is quite eerie, even for folk music. Jim adds spine tingling and subtle instrumentation and a gentle vocal delivery to create a very atmospheric piece. Perhaps one that younger listeners shouldn’t pay attention to too closely.

There isn’t a single track on the album that disappoints or screams filler, and the highs are many and various. As a folk album In Modern History continues Jim’s work of both embracing and challenging the genre. He is a true musical magpie, and this is a very shiny album to be proud of.

General release on 7 June 2010 by NIAG Recordings. Also available as a deluxe boxed edition limited to 1,000 copies. The box is signed and contains bonus tracks, a DVD making-of, 7" vinyl and extra artwork.