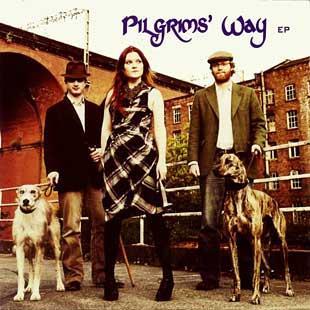 Pilgrims’ Way are a new three-piece band hailing from Stockport, with a stated aim to create gimmick-free folk. This EP is their first release, and lives up to that ambition pretty well. The lineup features Tom Kitching, known for his fiddle playing with Gren Bartley, joined by Edwin Beasant (Jabadaw) and Lucy Wright.

All three members are multi-instrumentalists, so there is a lot of variation in instrumentation and arrangement across the EP. Tarry Trousers carries a very enjoyable bass line that provides a backdrop to a great opening track.

Hot on the heels of Bellowhead, Pilgrims’ Way present their version of The Handweaver and the Factory Maid, which is equally enjoyable. The inclusion of the jews harp towards the end adds a new dimension, and brings the song to a really satisfying crescendo and conclusion.

Lucy brings a clarity of voice and lyric to the songs, but these qualities do not result in an loss of intepretation or emotion. This is particularly the case in the slower tracks Adieu Lovely Nancy and Maybe Then I’ll be a Rose.

Maybe Then I’ll be a Rose is one of two non-traditional tracks on the EP, but takes the familiar folk theme of the rose and briar as its inspiration. As the band point out in the sleevenotes, it is a realist’s love song!

Andro is the one instrumental track, and it really showcases the talent of all three band members, letting the instruments shine. It also features a great turn from Jon Loomes (Heretique) on hurdy-gurdy.

A Pilgrims’ Way closes the album, and is also the song from which the band have taken their name. It is one of Peter Bellamy’s Kipling songs, and a particularly fine one with a wonderful repeating refrain. The band place gentle harmonies on the refrain to produce a very pleasing little lift to the song, and also dabble successfully with some unaccompanied harmony singing.

The range of instrumentation on this EP allows real freedom of expression, as each song can be given very sympathetic accompaniment. At times it feels that Edwin and Tom could give the vocals a little less room and show off their skills more. Also, with so many instruments it is hard to pin down the Pilgrims’ Way ’sound’ in the six tracks of the EP, beyond the constant of Lucy’s voice.

However, this EP hints at a promising future for Pilgrims’ Way. It will be interesting to hear their sound develop on a full length release.

1. Tarry Trousers
2. The Handweaver and the Factory Maid
3. Adieu Lovely Nancy
4. Andro
5. Maybe Then I’ll be a Rose
6. A Pilgrim’s Way