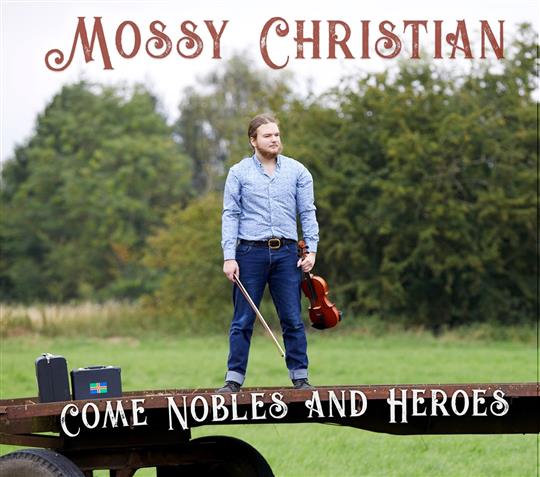 Having released an album of fiddle duets last year with Jim Eldon, the award winning Lincolnshire singer, dancer, fiddler, and author Mossy Christian now makes his solo debut, adding songs to the instrumentals, drawing on the traditions of Lincolnshire and Yorkshire from the 1700s to the present day.

With Christian playing fiddle, anglo concertina and melodeon, he is joined by Tim Walker on percussion and cornet, mandolinist Gina Le Faux, Johnny Adams on trombone and Edwin Beasant on bass bugle, with Jon Loomes contributing guitar and hurdy gurdy and Ruth Bibby doing her bit for clog dancing.

The album gets under way with a lively, clopping percussion-based instrumental double header. Appropriately titled Quicksteps and something to get any ceilidh off to a rousing start, it combines Market Rasen Feast and Louth Quickstep, sourced from a manuscript compiled by Lincolnshire papermaker Joshua Gibbons in the early 1800s.

It’s followed by the six minute long Ballad of Henry and Susannah, the first occasion to hear Christian’s richly accented vocal delivery which, accompanied by guitar and concertina, and this is meant with no disrespect, is what many would associate with the traditional ’finger in the ear’ approach. The song relates the true story of convicted thieves Henry Kable and Susannah Holmes, who met in prison where she bore him a son, the couple then being transported to New South Wales where he became a successful businessman. It’s adapted from a song written by Peter Bellamy for The Transports and plays out with a version of The Happy Meeting, a lively fiddle tune sourced from 19th century Lincolnshire folk musician John Buttrey.

Bellamy is also the source for The Way Through The Wood, a squeezebox-accompanied setting of the Rudyard Kipling poem interspersed with brass interlude, before the second jaunty Lincolnshire instrumental set, Black Joak / Blue Joak, the latter from a collection of country dances from 1740.

Another of his forays into Norfolk follows with the unaccompanied The Thresher’s Daughter, a be careful what you wish for ballad as a mother declares she’s rather see her son dead than marry beneath him. He dips into the Buttrey manuscript again for another country dance set, combining the first two parts of Mr Jackson’s Delight with the Wakefield Hunt, paired here with As Sure as The Devil’s in Lincoln from the TJ Dixon manuscript of 1798, Walker adding rat a tat military drums to proceedings.

Hurdy gurdy sets the lament mood of The Young Sailor, a variant of the barrack-room ballad The Young Sailor Cut Down In His Prime, brought low by hanging round with the “flash girls”.
Nineteenth century Tyneside fiddler James Hill is the source of The New Year’s Gift, sliding into the friskier E.A. Hornpipe, after which come perhaps the two best known numbers.

First up is William Taylor, wherein a betrayed woman is rewarded with command of her own ship for murdering her false lover and his new, wealthier, bride in a robust, urgent rendition. Followed immediately by The Red Barn Murder, this slowly swaying concertina based version of the Suffolk murder of Maria Marten in 1827 and the hanging of her killer.

Returning to his native stomping ground, heralded by cornet and sampled crowd noises, Lincoln Races has a simple fiddle and percussion backing. Christian hoofs his way through a broadside ballad from 1728, rather belatedly celebrating the opening of the new racecourse on the West Common some 25 years earlier.

An album that pretty much symbolises the entire ethos of this website, Come Nobles and Heroes is ebullient, informed and infused with a true passion for the music and its heritage, announcing Christian as one of the true new custodians of the tradition.

Released on CD and download on One Row Records January 1 2021 . Produced by Mossy Christian and Jon Loomes