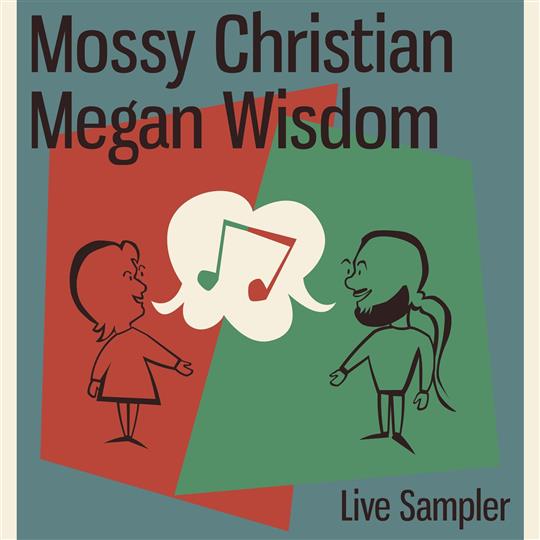 It is always refreshing to discover a new take on traditional material. Which is what Mossy Christian (vocals and accordion) and Megan Wisdom (vocals, whistles and saxophone), hailing respectively from Lincolnshire and Suffolk, provide on their latest release Live Sampler, a five track EP recorded live under the supervision of Phil Snell.

All of these songs and tunes have direct connections with the counties the artists come from in the East of England. Three songs, namely the hilarious opener Young Roger Esq., the lively The Maid and the Magpie and the final track Yarmouth Town, are delivered a cappella with the two voices crafting clever harmonies.

The other two tracks are the quite unusual accordion and saxophone set Oh Joe / Percy Brown’s and the medley of songs The Rambling Soldier / The Cuckoo. Here the first song is performed by Christian accompanied by some nice whistle work by Wisdom, and the second and more poignant one is performed by this latter, who shows her expressive potential at its best on this air which predates the 1780s.

Stories and lyrics are under the spotlight here, and the fact they perform them a cappella or with just a cheerful instrumental touch here and there really brings this material to life and produces a sense of authenticity that is reminiscent of the times they were written down or collected. If it wasn’t already clear from their previous solo recordings, from this EP it is evident that the force behind these two artists’ endeavours is pure passion for rediscovering and handing down traditional material, an activity that they will hopefully bask in for many years to come.

Released by One Row Records on 17 April 2022, recorded live by Phil Snell at Limbo Studios, Otley