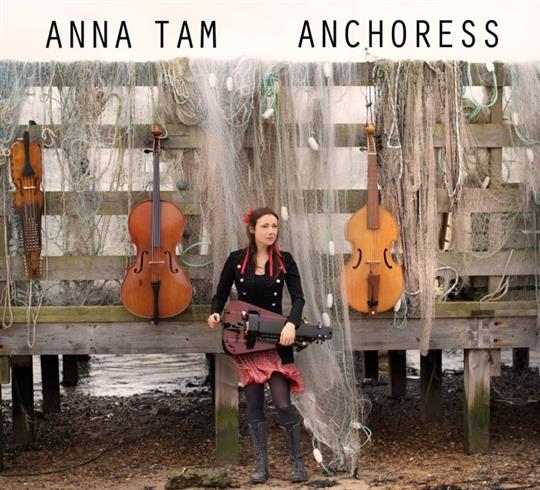 After the rapturous response received for her work with Wilde Roses, English singer and multi-instrumentalist Anna Tam (fiddle, hurdy-gurdy, cello, viola da gamba and nickelharpa) has just released her debut solo album Anchoress. With these thirteen ancient songs from the British Isles and two self-penned tunes, all gathered whilst in lockdown, she explores a variety of emotions all connected with isolation in its various forms. Here she widens her recorded repertoire, often centred on medieval and renaissance music, to a number of 18th and 19th century material.

This release follows in the steps of Tam’s successful Folk from the Boat series that saw her brightening the gloomy days of 2020 with a number of fascinating renditions of some traditional pieces. These include the first three tracks on this album: early 17th century Jenny Nettles, the old Northumbrian classic Whittingham Fair, reminiscent of its more famous Scarborough based equivalent but with a slightly darker mood, and Tarry Trousers, a song mentioned in Charles Dickens’ Dombey and Son, and the theme tune for Tam’s web series.

Her heavenly voice shines through every song, but especially in the more poignant ones, many of which have women at their heart, like the Irish evergreen She Moved Through the Fair, the supernatural The Unquiet Grave, taken down from a girl in Sussex in 1868, and the forward-thinking Let No Man Steal Your Thyme, a milestone in English folk music for being closely related to the first song ever collected by Cecil Sharp.

There are only two instrumental tracks on this album, both self-penned compositions, but they are as striking as the songs. Fairy Boat Hornpipe and The Goblet, the latter played on nickelharpa with Geoffrey Irwin on fiddle, are good samples of Tam’s dexterity, an ability that was already displayed with the accurate arrangements of the songs and her band recordings with Wilde Roses.

Not only does Tam look for old pieces in the archives to give them new life, but she also gives them a unique and distinctive personal touch whilst preserving their philological accuracy. The combination of her voice, instrumentation and choice of the material provides an immersive listening experience that explores some of the aspects of human nature that seem to have remained unchanged throughout the centuries.