Cara - Yet We Sing 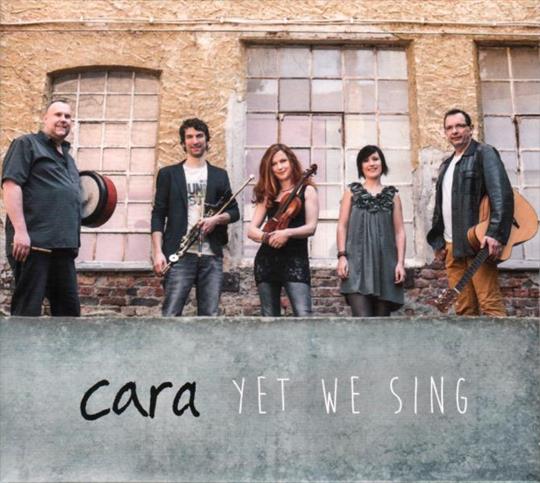 Listening to CDs many times over for a review can be a tedious process - not so with Yet We Sing, where the only annoyance is how much you end up humming the tunes! Five-piece German-Celtic band Cara go from strength to strength here in their fifth album.

Opener A Leaf For A Sail is a poignant original song about a man who "sailed out to sea / In a boat with a leaf for a sail", while his village both grieves for him and envies his freedom. This, alongside the marching, angry Cain’s War and the whimsical (though heartfelt in subject) Anchor in the Sky show off Cara’s songwriting talents, but they’re just as comfortable with traditional ballads and deliver an excellent version of The Elfin Knight.

The high point of this album is their stunning rendition of Little Musgrave. Cara were initially reluctant to record Musgrave in the footsteps of what they saw as Planxty’s definitive version. Listeners, be glad they took the leap anyway! The story and music are completely entwined - it’ll take you a few listens to detach enough to notice the pipe tune break before the lovers’ death, or the variations in melody. The final build-up is harsh, driving and enthralling, in contrast to the guitar-and-voice beginning and ending, the first line left hanging to finish.

Alongside songs there are plenty of top-notch tunes. It’s difficult to find more rousing sets than Heroes, Legend of Lisalway and The Exploding Case - particularly the stomping hornpipe Highland Reggae in Heroes, which brings ceilidh straight to recorded music.

Land of the Midnight Sun and Schottische Kerlou are more swaying, while The Naked Man in the Whirlpool (written in a jacuzzi overlooking a Tuscan sunset, and appropriately lazy-feeling) and A Wee Dobro Tune bring out the musicians’ expressive side.

The title song, Yet We Sing, is about recovering from grief and loss, yet it’s not maudlin - it closes the album with a blend of sadness and hope, harking back to the themes that run through some traditional songs.

Yet We Sing is that rare triumph of a record that beautifully renders both songs and tunes. Whether you’re a devoted follower of Cara or you’ve never heard them before, this is an album that will leave its marks in your memory for a long time.