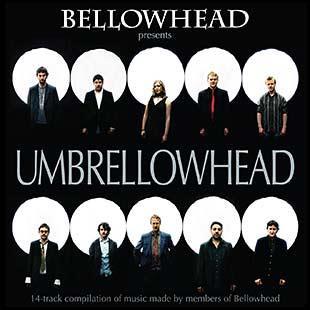 Umbrellowhead is a 14 track compilation made up of music from the other projects of the Bellowhead band members. The album opens with an excellent and wonderfully titled unreleased Bellowhead track, ’Unclothed Nocturnal Manuscript Crisis’. This will be familiar to many from their live performances and its great to finally see it released.

I would divide the rest of the album into three categories. First we have well selected songs from recent, successful albums by Bellowhead’s established stars. Many fans will already own work by Faustus, Benji Kirkpatrick, Belshazzar’s feast and Messrs Spiers and Boden.

The second category contains material from artists who are just starting solo careers or new projects. There is the fine song ’The Fisherman’ from Rachael McShane’s debut album ’No Man’s Fool’ and ’Gaol Song’ from the newly released ’Catches & Glees’ by Sam Sweeney & Hannah James of Kerfuffle fame. These are both high quality folk music and their inclusion here may bring a wider audience to these newer acts.

Finally there is an eclectic mix of tracks from band members who, when not with Bellowhead, mainly work outside of folk music. This ranges from the bizarre but enormously fun Japanese space-funk of Setsubun Bean Unit to jazz numbers and an interpretation of traditional Bulgarian dance. The final track is an yet another demonstration of the many talents of Paul Sartin, being his Psalm Chant composition performed by the Choir of Christ Church Cathedral, Dublin.

This is a really entertaining album and I found something new to like each time I played it. My only caveat might be that some listeners may already own quite a bit of this material on other albums but there is enough new and varied music to make Umbrellowhead well worth investing in.

Billed as "Bellowhead Presents: Umbrellowhead" this is a compilation of the work the members of Bellowhead do with other artists. Released by Megaphone on 30 November 2009.