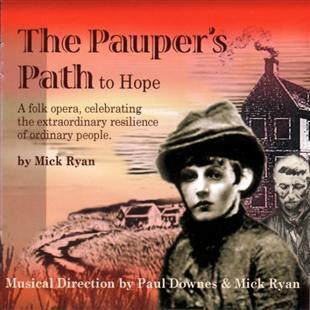 Mick Ryan’s ambitious folk opera was commissioned with the workhouse in mind - and in particular how those that worked in them were affected by the well-meaning but ill-conceived New Poor Law of 1834.

Inspired by the National Trust Workhouse Museum at Southwell in Nottinghamshire, the cast debuted it in June 2011. The Pauper’s Path to Hope follows the stories of a selection of paupers and vagrants, along with an orphan and the workhouse master. A mixture of spoken word and song keeps the listener on the narrative thread, but most of the songs work as standalone pieces. This relaxes the pressure on the story, and makes it an accessible CD to listen to - you don’t need to have seen the opera performed.

Musical co-director Paul Downes sets the action to his acoustic guitar. It’s a big ask to keep things interesting for 28 tracks but, with some accompaniment from bodhran and flute, he manages it.

There are some excellent performances from the cast - Ryan himself as the feckless Mark has something of the rich colour of Jim Causley in his voice, while Judy Dunlop and Maggie Boyle distinguish themselves with clear, empathetic readings and heartfelt singing. Downes pulls off an entertaining comic Brummie accent as the workhouse master whose approach exemplifies attitudes towards the ’deserving’ and ’undeserving’ poor.

Ryan’s expansive approach means he is able to cover the story from a variety of different angles, and with a number of inventive musical styles. There are one or two traditional tunes, Who? has a Latin inflection while My Home neatly borrows from Warren Zevon’s Lawyers, Guns and Money. Work! Work! When?s It Gonna Stop? and the bitter Industry, Usefulness, Virtue are full of life, giving a voice to the working men and women while weaving in their personal stories. Jolly Good Job is just one example of the opera’s many affecting duets.

Special mention ought to be made of Phoebe Kirrage, who plays the opera’s orphan. Truly a bright young folkie at just 14 years of age, her performance of The Workhouse Child in particular is confident and beautifully pitched.

Ryan and his cast set out to "celebrate the extraordinary resilience of working people", and they certainly achieve that. Sensitively presented, full of startling facts and impressive characterisation, this is as engaging an education in nineteenth-century history as you could ask for.