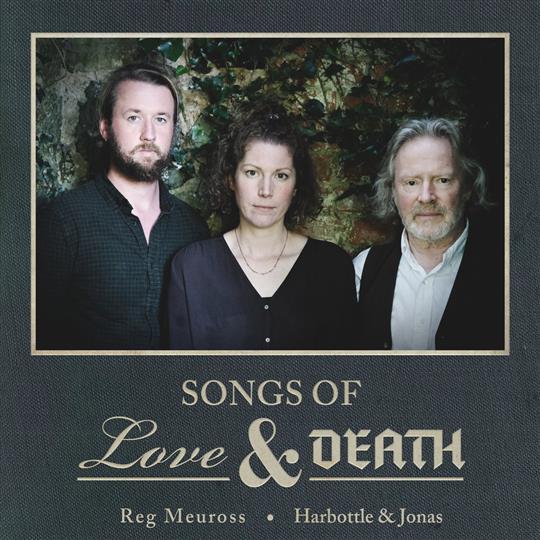 During the lockdown periods many folk artists have produced fascinating web series that rapidly became sources for new albums and collaborations. This is the case for acclaimed duo Harbottle & Jonas, their latest release Songs of Love & Death a collaboration with singer and multi-instrumentalist Reg Meuross, made up of ten old favourites from the folk repertoire, selected and arranged in their own style.

From the opening She Moved Through the Fair to the final I Wish the Wars Were All Over, through compelling renditions of milestones of British folk repertoire such as Lord Franklin, Oxford Girl and Lord Randall, they gently guide the listener through these stories and the invocations they produce, evoking images of distant times with their thoughtful settings and delicate voices.

To arrange and deliver a distinctive rendition of a traditional song, especially the most popular ones, is never easy; however these three artists really manage to get the job done with elegance and consistency. The intricate substrate of fretted instruments, the gentle touch of the concertina and harmonium and the combination of their voices all contribute to a consistent and enjoyable release, perfect for both experts and neophytes of traditional music.

Two tracks deserve a special mention: the trio’s version of medieval murder ballad Lord Randall and a very poignant recording of The Trees they do Grow High, a late 18th century Scottish song that provided the inspiration for Burns’ Lady Mary Anne.

These three musicians have already shown great mastery of traditional material with this album; we are eager to hear them recording some original material on their next release.

1. She Moved Through the Fair
2. As I Roved Out
3. Lord Franklin
4. Adieu Sweet Lovely Nancy
5. Oxford Girl
6. Lord Randall
7. Barbary Allen
8. Anachie Gordon
9. The Trees They do Grow High
10. I Wish the Wars Were All Over