The Bailey Sisters - Songs from the Distaff Side 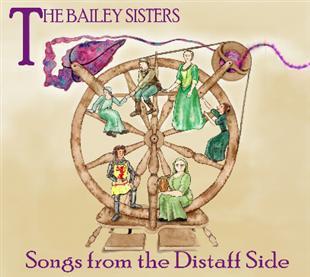 "Distaff", the back cover of the Bailey Sisters’ new album tells us, is the spindle used to hold unspun flax or wool fibres, but it is also used to describe women, who would traditionally have been practitioners of the spinning trade, and who are the focus of this album.

There are stories of love, valour, regret and justice. In a solo rendition of Maddy Prior’s Isabel, the heroine crowns her lover king with no regrets; A North Country Lass relates the homesick lament of a girl who has left her family for London, while in Tidy the Cow, a rousing and comical finish to the album, a farmer’s wife proves that her day is not as easy as her husband claims by setting him to work in her place.

While many songs tell of women choosing their own fates in love, it’s also nice to hear songs about women and their trades, such as Honiton Lace, a lovely song by Martin Graebe about a Westcountry lacemaker, or Old ’Arris Mill, about a group of mill workers who, in their own words, "don’t give a jot, we’re a bloody fine lot".

The qualities of the interweaving voices are striking, and complement each other well. Often one of the trio leads the song and the other two provide atmospheric backing vocals and sometimes percussion.

The largely unornamented singing style and sparing use of instrumental accompaniment allows the stories to take centre stage. When there is melodic accompaniment (in the form of Karen Dyson on guitar and Aly Rainey on fiddle), it’s well-placed, such as the beautiful fiddle opening on the first track, The Blackbird.

There is also a completely instrumental track, Fiddle Maker’s Waltz / Oldham Mumps, accompanied by clog dancing from fiddle maker Corrie Schrijver, for whom the first tune was written.

The end result is a rich collection of traditional, contemporary and self-penned stories about women from different walks of life. From the selection and arrangements of the songs right down to the painted cover artwork, Songs from the Distaff Side is a labour of love.

Full disclosure: Shelley Rainey, one of the Bailey Sisters, is an editor at Bright Young Folk. Sol was chosen to review this CD as she is one of the few people in the folk scene that has not met Shelley. 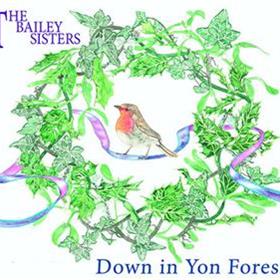 Review
The Bailey Sisters Down in Yon Forest 2017