The Bailey Sisters - Down in Yon Forest 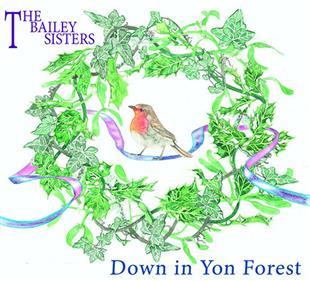 Just like The Bailey Sisters themselves, Down in Yon Forest is a tidy and self contained album. There are no guest players but this provides a clear musical focus, a sense of musical clarity.

The track listing follows a chronological order, beginning with Autumn Garden, the arrival of the Snows of Winter come next, before moving through the Christmas story and ending with the arrival of the Brave New Year. It’s not radical but a Christmas album shouldn’t be.

For example, Christmas is Coming and Deep Under the Snow could easily sound very similar but singing the former as a round and the latter accompanied by a fiddle and a shruti box makes the songs sound completely different while maintaining the integrity of The Bailey Sisters core sound, their vocals.

The Angel Gabriel, a Basque folk song consisting of solo vocals and a recorder, introduces the medieval sound that recurs throughout Down in Yon Forest. The medieval feel returns later with Personnent Hodie a medieval spiritual from the 1500 and In Dulci Jubilo, sung in English rather than the original Latin or German.

Gaudete is included not only for its Christmas theme but the fact that Shelley Rainey fell in love with folk music after Steeleye Span sang it on Top of the Pops. It is good to see Guadete here in its natural environment, a Christmas album. In fact it is nice to see all of this medieval sourced music mixed into an album with more contemporary folk rather than imprisoned to the confines of a specialized music album.

Ballad of Bethlehem, sourced from the 1970s, feels very much of that time, you can close your eyes and easily imagine this in a Peggy Seeger album. The guitar style is very reminiscent of Peggy Seeger and it contains that same note of absurdity in the social injustice of it all.

The Bailey Sisters sing Away in a Manger to an American tune that they found and prefered. I have to say I agree with them, this version feels much more vulnerable and suitable to the subject matter of an infant child (even if he is the son of God) than the drone from school assemblies.

Down in Yon Forest is concluded with Brave New Year, welcoming in the potential of a new year and the rebirth of the frozen landscape, after venturing out The Bailey Sisters return to three part close harmony.

Like all things Christmassy should be, Down in Yon Forest is a great mix of new and old, the familiar and the novel. An all round fantastic Christmas folk album.

Full disclosure: Shelley Rainey, one of The Bailey Sisters, is an editor at Bright Young Folk. Christopher was chosen to review this CD as he is one of the few people that has not met Shelley.

1. Autumn Garden
2. The Snows of Winter
3. The Angel Gabriel
4. Christmas is Coming
5. The Ballad of Bethlehem
6. Personnent Hodie
7. Deep Under the Snow
8. In Dulci Jubilo
9. Away in a Manger
10. Gaudete
11. Castleton Carol/Carol of the Bells
12. The Seven Joys of Mary
13. Coventry Carol
14. Poor Little Jesus
15. Jesus Christ the Apple Tree
16. Welcome in a Brave New Year 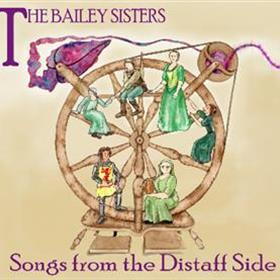 Review
The Bailey Sisters Songs from the Distaff Side 2014