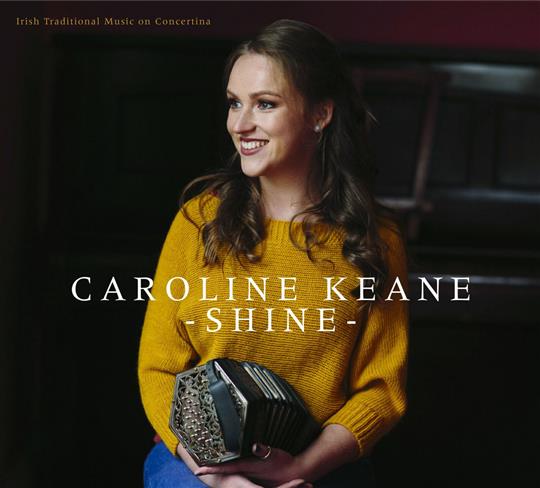 If Caroline Keane’s works with Four Winds brought her name to the attention of many folk music fans, her first solo album will strengthen her reputation of one of the most accomplished concertina players from these islands. For Shine she gathered a number of her firm favourite tunes played with some of her favourite people, together with some self-penned compositions,

Slides, jigs, reels and hornpipes follow each other in a sparkling sequence of mostly Irish tunes that will make many feet tap. The Roscommon Reel / The Ballymahon Reel / Father Newman’s, The Gatehouse Maid / Arkle Mountain / The Strawberry Blossom and The Nightingale / The Rock on the Clyde / The Jig of Port Fleadh are the most striking samples of her virtuoso playing and her individual approach to both contemporary and ancient material.

The album includes also a heartfelt rendition of When You’re Gone I Say Your Name, a gentle tune by guitarist Gerry O’Beirne. The sparse arrangement magnifies a tune that, despite being the only slow-paced one on this release, beautifully suits the sensitively breezy mood of the entire work.

Keane’s concertina sings with her characteristic voice, accompanied by a series of guest stars that, without stealing the spotlight, set the stage for her free-flowing playing. She succeeds in the hard task of making her instrument roll like a fiddle and cran as pipes without losing the peculiar warm sound of the reeds.

Moreover, perhaps a result of her intense activity both as a teacher and as a sought-after member of Irish west coast’s folk scene, a well considered deal of ornamentation emerges from every track of this album. She masterfully impresses her own trademark on the tunes, creating a sound that could compete with the works of renowned Irish music stars such as Cormac Breatnach and Niall Vallely.

No other title could have been more appropriate than Shine; there is an abundance of technical ability and natural musicality on this truly enjoyable release, probably heading for well-deserved awards.