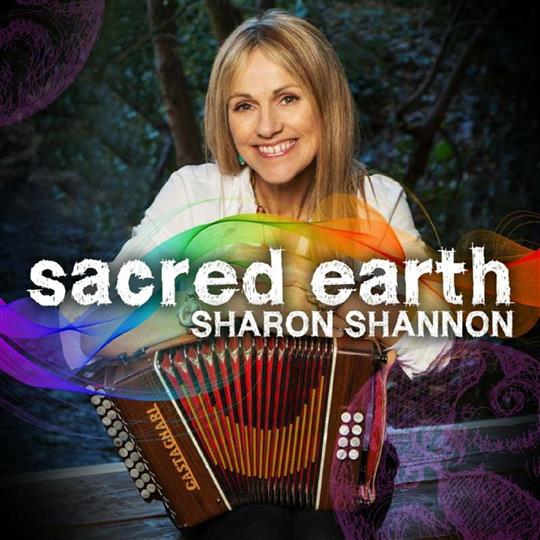 On Sacred Earth, Sharon Shannon combines two contrasting musical traditions, working with Irish and African musicians to produce an innovative fusion of sound. The plethora of guest musicians play a mind-boggling array of instruments fusing styles with a scattering of Western classical music .

As the album begins, you might be fooled into thinking you are listening to Paul Simon’s Graceland album, but the entrance of the accordion quickly reminds you that you are listening to one of Ireland’s finest accordion players. The African instrumentation and rhythms give the tune a definite feeling of sunshine.

Sacred Earth has less energy than the opening track, but is again founded on African rhythms. There are some interesting vocal effects too (is this the “friendly heckling” mentioned in the sleeve notes?). The different instrumentation weaving in and out of the texture produces a hypnotic effect.

The distinctive sound of the cora features in several tracks, notably The Machine and the Sea Shepherd. In the latter the contrast with the accordion works particularly well.

Shared Earth is truly an album of contrasts. Pull out the Stops features the punchy style of accordion playing familiar in Cajun music. The song He’ll Have to Go takes one by surprise somewhat in its position near the middle of the album. This song with a waltz tune, popular with crooners, marks a peaceful interlude in a largely energetic album. The excerpt from Franz Lehar’s The Merry Widow has a French café feel. Perhaps the most exciting track is Let’s Go, which really rocks.

The album ends in traditional style with The Bull Fiddle, one of Sharon Shannon’s own tunes, providing an appropriate final to the album.

Sacred Earth is a fine fusion of styles, showing how well musicians from different traditions can work together.