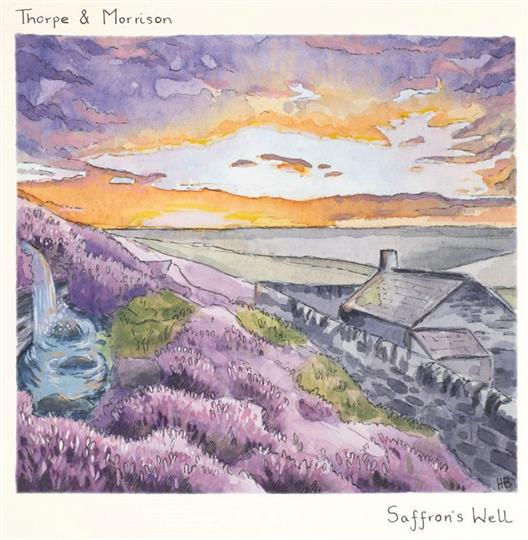 The always-flourishing folk scene of the British Isles has two new rising stars, Harry Thorpe and Sean Morrison. Their debut album as a duo is a collection of original compositions and all time favourites from England and Scotland, played on fiddle and guitar, and published with some of the most beautiful cover artwork in recent years.

The opening track It’s a Strathspey, Harry starts with a classic example of the syncopated form of music from the Highlands, before the duo enters a set of well-known reels including The High Drive by Gordon Duncan. The energy of their Birmingham made Anglo-Scottish musicianship is palpable in tracks such as The Caterpillar’s Vengeance and Lost to the Circus; the latter being the most striking set on this album for the versatility they demonstrate.

There are also some meditative moments like the haunting In Her Element or the enveloping first and slightly darker sounding tune in The Late Night Bus set. The album closes with the majestic Sea and Sunrise, probably the best summary of their dynamic musical sensibility with its changes in pace and keys.

It is always great to see young people getting into traditional music as professionals, and it is even better to discover young artists approaching the genre with the mastery of veterans. The right amount of ornamentation, the wide range of tunes and the diversified spectrum of sensations they evoke make for a truly enchanting listen.

A detail that enforces the sense of authenticity that oozes from the entire release is the distant sound of rain at the end of some tracks, as the album was literally recorded during a storm.

Fiddle and guitar notes float around each other, creating a spellbinding mix of old and modern, a both traditional and forward looking release where you can always find something new with every listen, a highly recommended album for folk music fans of every age.

Released on CD and digitally on 6 June 2020, recorded by Andie Thomson at Gighouse Studios