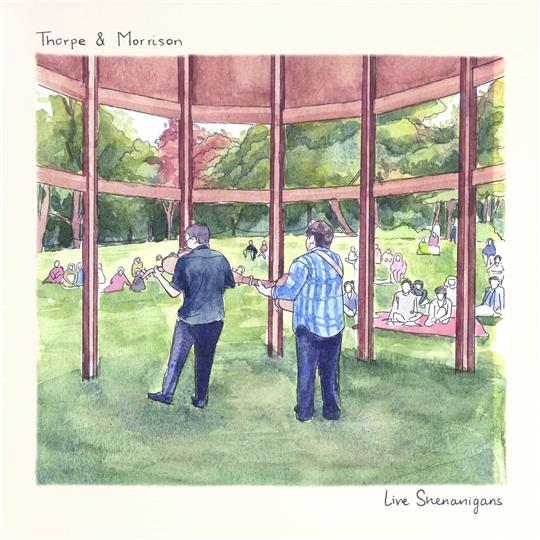 Guitarist Harry Thorpe and fiddler Sean Morrison, both from Birmingham Conservatoire, are two young and versatile musicians in a close-knit duo firmly rooted in traditional music and borrowing elements from other musical genres to enrich their sound. Their second album Live Shenanigans consists of two sections. The first nine tracks were recorded live at a gig at Eastside Jazz Club in Birmingham, whilst the second portion is made up of five new tracks recorded in the studio.

Most of the first nine tracks are live renditions of tunes from their highly successful debut album Saffron’s Well. Notable exceptions are the hilarious satirical song I Got this Email, the previously unrecorded tune Emergency Macaroni and the song and reels combination Go and Leave Me.

Just as on their first release, the second part of Live Shenanigans is a display of versatility and dexterity. It starts with the jazzy Another House Plant and includes lively medleys such as Neavan’s Lament, Nae Plans Nae Worries and Luke Skywalker’s Carry-out and the solo guitar track Shared Values.

Once again, these two artists have crafted something special. If Morrison’s exquisite fiddle playing catches the ear, especially on the fast paced tunes in Sea and Sunrise, Neavan’s Lament and It’s a Strathspey, Harry, Thorpe’s skills on fretted instruments is equally remarkable.

Not only does he provide fitting accompaniments, but he has his own voice on all of these tracks. Take for example his breath-taking passages in the second half of Go and Leave Me or on Nae Plans Nae Worries or his delicate touch on In Her Element.

If the core of the album and of the duo’s career so far is instrumental music, the two songs they recorded for this release are a very pleasant surprise. The listener will notice they were very much appreciated by an ecstatic live audience.

Despite being very young, Thorpe & Morrison have already shown great mastery of both old and contemporary material as well as producing captivating new tunes; Live Shenanigans deservedly establishes them as new stars on the folk circuit.