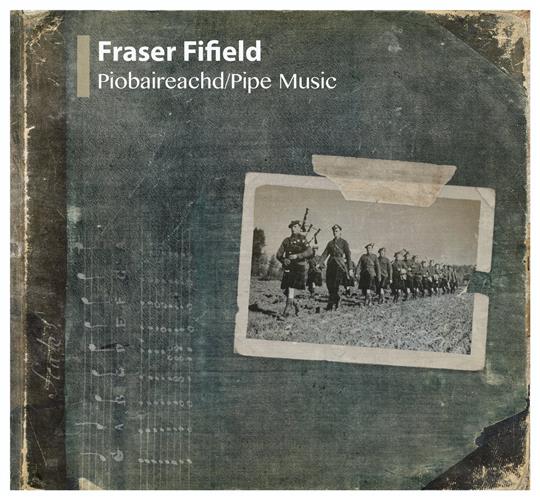 Piobaireachd, also called pibroch or ceol mòr, is the name which denotes the haunting and sometimes mysterious highland bagpipe pieces, considered the classical music for this iconic instrument. London born piper Fraser Fifield brings this old form of music into the 21st century with his latest release Piobaireachd/Pipe Music, an album in which he exits the rigid guidelines of this genre to create new soundscapes, centred on traditional melodies, but unusually accompanied by whistles, saxophones, clarinet and kaval.

The album includes both old pibrochs, sometimes only their grounds, at other times their variations too, and original pieces inspired by this ancient form of music. The most stunning examples of the former are Breizh / A Flame of Wrath, where a 17th century bagpipe tune attributed to Donald Mòr MacCrimmon is embedded in a whistle, saxophone and clarinet texture that underlines the peculiar mood of this dark tune, and Lament for the Old Sword, in which whistles and saxophones interweave to create a soulful rendition of a well-known piobaireachd with a few of its variations.

Original compositions include both tunes based on pibroch grounds, such as Improvisation on Whistle, which evolves from that ancient melody to an Indian music infused piece, and totally self-penned compositions such as Being in Time, a border pipes, kaval, saxophones and whistle track written for Fifield’s pipe maker Nigel Richard, and The Piper’s Premonition, arguably the most energetic among the eleven tracks on this album.

For almost 30 years, Fraser Fifield has been one of the most recognisable voices on the folk scene, this latest work only enforces his reputation of one of the most avant-garde artists in the British Isles. The harmonies that the other instruments create with the pipes, the choice of the material and the little grain of improvisation on many of these tracks, something truly unusual in the standard delivery of ceol mòr, all help develop surprising, sensitive and often mesmerising soundscapes that will surely enrapture an open minded listener.

The real accomplishment of this album has to be the modern approach to traditional tunes, interpreted with a jazzy and global flavour, but still coherent with feelings of magnificence, anger and loss. Surely not an album for intransigent purists, but definitely a praiseworthy and forward thinking album, set to become a new milestone for the development of the ancient art of piping.

Released on 25 October 2021, recorded, engineered and mastered by Fraser Fifield

1. In Regards that Matter
2. Being in Time
3. Breizh / A Flame of Wrath
4. Improvisation on Whistle
5. Lament for Red Hector of the Battles
6. Where Rivers Meet
7. Lament for the Old Sword
8. The Piper’s Premonition
9. The MacDougall’s Gathering
10. Improvisation on Bagpipes
11. Praise of Longer Days