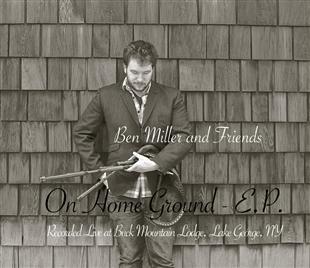 Ben Miller is an American musician who divides his time between Edinburgh and New York. Strongly influenced by traditional Gaelic music, he plays Scottish smallpipes, highland pipes and border pipes.

For many, an EP of bagpipe music might not be an attractive proposition. However, this CD is well worth a listen. Ben is joined on On Home Ground, his debut recording, by friends on 12 string guitar, bouzouki, harp, fiddle and even Jew’s harp to produce five very different and enjoyable tracks.

The opening track Home Again, Home again, Jiggity Jig marks a lively start with the pipes and harp in duet - a very successful combination. The two instruments duel again in Lowlands (not the mournful folk song but another lively tune set) with the sharp contrast of the reediness of the pipes and the gentle tinkle of the harp working surprisingly well together.

Reel Oldies begins in a much gentler mood, with fiddle and guitar joining the pipes. The pace soon picks up though, with the Jew’s harp adding extra bounce towards the end.

In sharp contrast to the tune sets is the beautifully haunting song ]Beinn Dòbhrain. Here the voice and pipes are in duet. Dominique Dodge adds harp to her lovely vocals. It is a bit of a shame however that some studio buffoonery at the end of the track shatters the tranquil mood.

The EP ends in party mood with the aptly named Bigger Blast - all the instruments play a part here and there is even some step dancing to add to the occasion.

A really exciting debut recording from a talented musician. 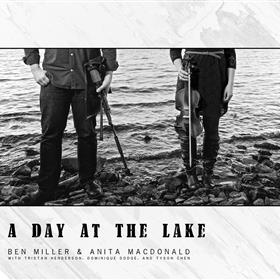 Review
Ben Miller & Anita MacDonald A Day at the Lake 2015