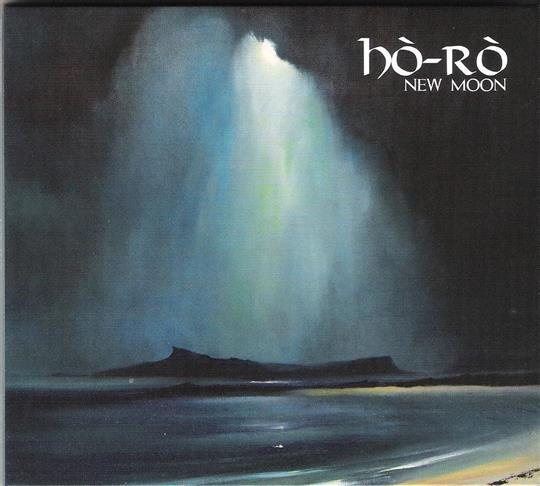 New Moon begins with a short but enigmatic intro track of distorted fiddles and vocal snippets drifting across an imagined valley or seascape; hinting at the treats that are yet to come in this energetic third album from HòRò.

It has been five years since this 7 piece band comprising Hannah Macrae (fiddle and vocals) Calum MacPhail (accordion and vocals) Sean Cousins (guitar), Paul Martin (keys and electric guitar), Ally MacLean (pipes and whistles), Calum MacQuarrie (bass) and DC Macmillan (drums) came to prominence with their fresh blend of dance-infused trad tunes and songs. There is additional support on drums from Matt Arnot on this new album; it bounds in, grabs your ears and commands you to put your dancing shoes on!

All of the tunes, jigs and songs convey a concert hall vibe with their lofty production (by Mànran’s Ross Saunders at GloWorm Studios). However the deft arrangements and intricate counterpoint amongst the instruments can still be appreciated. The second track, Spot On, opens with an infectious Balearic theme which melds and weaves through a strong trad set of tunes.

This approach recurs through the instrumentals of New Moon but this is not the whole story; they are interspersed with melodic ballads such as The Long Black Veil, telling of a spectral victim of a miscarriage of justice and Follow The Heron, which poetically heralds the return of spring.

The masterful and heartfelt duet Isle of Eigg is crowned with the most superb pronunciation of the word ’rhododendrons’ you will ever hear. The album artwork, by artist Dot Walker shows the view across to the Isle of Eigg from the silver sands of Arisaig that this song celebrates.

With this album, Hò-Rò have built upon their reputation for providing exciting new perspectives on the traditional canon alongside innovative original repertoire. New Moon conveys the vibrancy of a live gig that will doubtless inspire and increase HòRò’s audience, and rightly so.