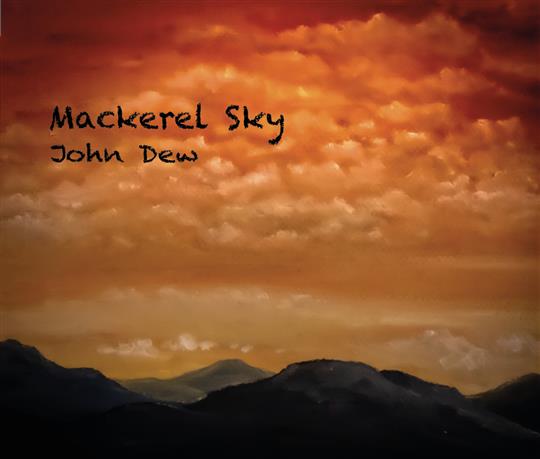 Mackerel sky is an atmospherical phenomenon that sees the creation of a multi-layered formation of clouds, similar to intricate fish scales, and is a general signal that the weather is likely to change. Taking inspiration from this fascinating spectacle, award winning piper and whistle player from Crieff John Dew explores polyphonic compositions for his instruments in his debut full-length album.

The album opens with a suite of four tracks; Prelude, the stunning title track which transposes in music the build-up of the layering of the clouds and then the rainfall, Merlin’s Leap and Sunday Afternoon in Rattray, that create a unique medley and introduce the peculiar approach Dew has in crafting and arranging these polyphonic compositions.

Multi-layered pieces are the core of the release, though it also includes more traditional medleys, on both pipes and low whistle, and a pibroch, the well-known Marquis of Argyll Salute that closes the album on a high.

The juxtaposed guitar substrate by Dylan Cairns and the skilful bodhràn playing by Eoghain Beaton provide a fitting accompaniment that only extolls the intricate harmonies of these characterful tunes.

Another strong point of this album is the variety of atmospheres that the listener encounters whilst exploring it. Foot-tapping jigs and reels alternate with light and serene, often low whistle-centred, pieces such as The Flight of the Osprey and The Vineyards of Unang and to competition style tracks such as the delightful set of Retreat Marches and the ceol mòr finale.

With this first and imaginative full-length album, Dew rightfully enters in the elite circle of pipers that excel in all fields of expertise: pipe bands, solo competition and the folk scene, a remarkable achievement for such a young artist.