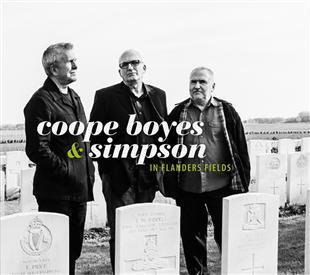 The centenary of the start of what became known as ’the War to end all Wars’ is commemorated by Coope, Boyes & Simpson with a stunning 50 song set; In Flanders Fields.

This collection is the culmination of over twenty years work chronicling and collecting songs and stories about the Great War. The 2 CD set brings together newly written songs, with existing and first time recordings to tell the story of the war as seen through the eyes of the people who lived it.

Some of the songs on this album will be familiar to anyone who has an interest in this period of history. Goodbye Dolly Gray, for example, is sung full throated with just a jew’s harp for accompaniment. It paints a picture of men going off to battle saying farewell to their loved ones.

By way of contrast, Roses of Picardy goes for a parlour song feel as it pitches a solo voice against the piano playing of Belinda O’Hooley. The song is beautifully sung and played.

Many of the songs on this album look at the war from the conscript’s point of view. Hanging on the Old Barbed Wire takes a very dim view of the officer class whilst Marching, Marching, Marching deals with life at the sharp end of war with only rain, bad food and meagre pay to look forward to until the inevitable end.

There are original songs too, of course and it’s here where some of the best material on this album can be found.

June Tabor has already recorded a fine version of Lester Simpson’s Standing in Line but the gorgeous three part harmonies on this new recording give Tabor a run for her money.

Equally moving is another Lester Simpson original, Shuffling Jack. This song was inspired by memories of men sitting on the steps of terraced houses and wearing carpet slippers. It tells the story of Jack, invalided home after being shot, who has been driven mad by the horror of what he has seen and unable to wear boots because of the legacy of trench foot. The jauntiness of the tune is belied by the darkness within.

’Who’ll sing the anthem and who’ll tell the story’ runs a line from Only Remembered, the last song on the album. It’s a fitting song to finish on as this secular hymn sums up the ethos of this project - remembrance.

“The more we learn about war, the more important it becomes to sing about peace” runs a quote in the (excellent) booklet that accompanies these CDs. In these dark and troubled times, that’s something to hold on to.

Released by No Masters, August 2014

1. The Almanac (Instrumental)
2. Fault Lines
3. England to Her Sons
4. The Sergeant Major’s Having a Time
5. The Burning Mill at Messines/The Bloody Fields of Flanders
6. Ao Tea Roa
7. Along the Menin Road
8. Lloyd George’s Beer
9. Goodbye Dolly Gray
10. Down Upon the Dugout Floor
11. Marching, Marching, Marching
12. Chorus Line/When the Moon Shines Bright on Charlie Chaplin
13. Soldier, Soldier
14. Little Man You’ve Had a Busy Day/Standing in Line
15. Roses of Picardy
16. Hanging on the Old Barbed Wire
17. When This Blasted War is Over
18. The Rhyme of No Man’s Land
19. Ticker’s Jam
20 Onward Christmas Soldiers
21. Living it Up
22 Peace on Earth
23. Tyne Cot at Night/ I Want to go Home 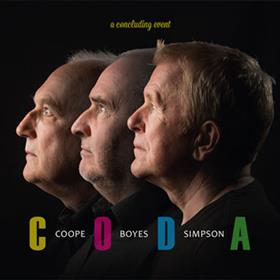