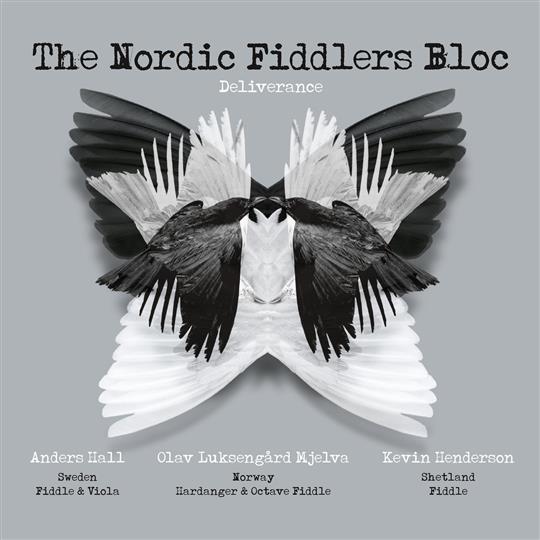 Shetland, Sweden and Norway have three of the richest fiddle traditions in the world. There are also well documented historical links between these countries going back hundreds of years. It’s no surprise, therefore, that many folk musicians from the North Sea region feel an affinity for each other’s music and choose to record and play together.

Deliverance is the second offering from Nordic Fiddlers Bloc. On the surface a set of ten fiddle trio pieces seems a daunting listen. However, the combination of traditional, octave and Hardanger fiddle (along with a smattering of viola) gives the album a unique soundworld that haunts the listener for days.

The album starts off at a cracking pace with Talons Trip to Thompson Island composed by Kevin Henderson. It’s a lively and direct tune played with gusto.

Things get a little darker with Flinkin. On the surface this is a polska but the piece starts off with a mysterious introduction and has a strange middle section of repeating notes before the tune reasserts itself.

The Hardanger fiddle has such a wistful, melancholic sound that it’s very suited to slow tunes. The title track of the album is such a tune and it’s a cracker. Written by Mjelva, the tune depicts the north of Norway during wintertime. It’s one of those tunes that always seems to have been there, just lying in wait for the right composer to discover it.

There’s a lot of variety on Deliverance. The traditional Djävulspolskan (The Devil’s Polska) builds up quite a head of steam as it reaches its climax whilst the pretty waltz, Halls Lille Vals is played with such delicacy that it brings a smile to the face.

Of course with Kevin Henderson on fiddle the music of north Scotland is well represented. Da Scallowa Lasses / Lorna’s Reel ensures that the traditional music of Shetland has not been forgotten whilst the Orkneys are evoked by the sprightly The Hen Hut.

However, for this listener, it’s the slower pieces that make this album special. The final tune Nødåret, composed in a “not so good year” sums up the spirit of this recording. On the surface a light simple tune, it is undercut by dissonant harmonic clashes between the fiddles which, while not entirely evoking a heart of darkness, at least suggests one.

Over the last few years there has been a resurgence of interest in purely instrumental bands. Nordic Fiddlers Bloc, like Spiro and Leveret, prove that you can hold the attention of an audience by just playing good tunes with imagination and flare. Deliverance is an album of substance and quality which does not pall on repeated listening and will give much pleasure.