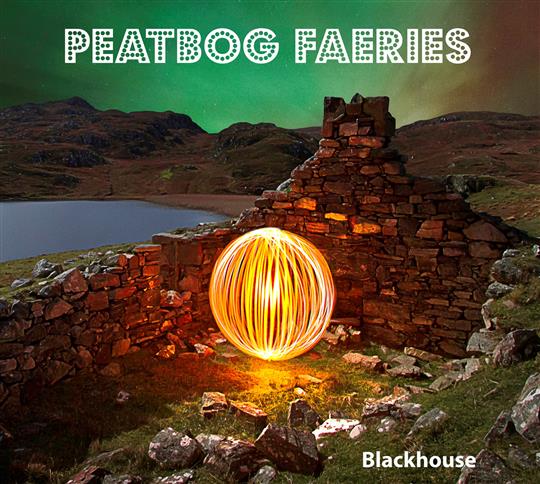 The Peatbog Faeries are a six-piece band based on the Isle of Skye. Between them they play pipes, whistle, fiddle, guitar, keyboards, bass, drums and percussion. Blackhouse is their 7th studio album. It is an entirely instrumental album, containing 10 original tracks which are heavily influenced by traditional music. This combination produces an interesting sound which must be particularly exciting live.

As the album opens you may be forgiven for thinking you had stumbled into a trendy nightclub with its layers of electronic percussion and keyboard effects. However, the entrance of the melody instruments will reassure you that this is indeed music that is rooted in tradition. Most of the tunes on Blackhouse begin in this way with the more traditional pipes, whistles and fiddle dipping in and out in a musical conversation with the modern instruments, often with an infectious beat.

However, not all the tunes are fast and furious. There are moments of relative calm in quieter tracks such as Angus and Joyce Mackay and The Real North, but on the whole, this is high-energy music.

The tunes have intriguing titles like Jakes on a Plane, Spider’s and The Dragon’s Apprentice - the sleeve notes will tell you the story behind each one and they are worth the read.

The main melody instruments vary between tunes - Jakes on a Plane has the fiddle and whistles in duet while the pipes feature prominently in Tom in the Front. Spider’s breaks the pattern of the other tracks and is led by the fiddle.

Perhaps the most exotic-sounding track (and longest at over 8 minutes) is the closing one, Strictly Sambuca, with its other-worldly extended introduction. It has a hypnotic quality with the melody instruments lower in the mix than in the other tracks.

At times Blackhouse can seem a rather formulaic album, but it is an interesting take on traditional music which must be great to dance to, and fans of Peatbog Faeries will not be disappointed.

Released on Peatbog Records 25th May 2015