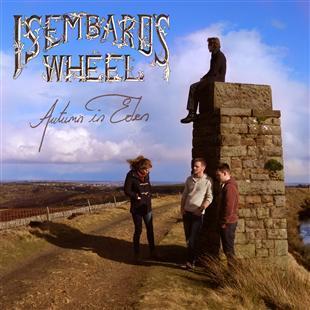 Isembard’s Wheel are a Sheffield-based quartet, fronted by Alexander Isembard on guitar and vocals. The other band members are Edward Young (mandolin and vocals), Toby Morris (banjo) and Lucy Brookfield (cello). Rebekah Foard guests on fiddle on two tracks.

On their 5 track EP Autumn in Eden, they achieve a huge range of texture from stark a cappella vocals to a full choral and orchestral sound.

The atmospheric opening track, The Cliffs, begins with birdsong and waves. The two a cappella voices which being the song sing two completely different songs against each other, in the manner of an Elizabethan catch. The addition of the instruments and the University of Sheffield Singers’ Society (singing in middle English) make for an exciting conclusion.

Gloucester Gaol again begins with an unaccompanied voice but harmonies and percussion are added, even a banjo, giving a bluegrass feel. The vocals in this song are fast, but with clear diction, so the listener doesn’t have to battle the tempo to understand the song.

In contrast to the first two tracks, Skylarks begins with a gentle instrumental introduction. Again there is a rich vocal sound.

Autumn in Eden begins with an exciting instrumental frenzy before the vocals join in, while Lightening the Load begins much more gently and is in a more traditional ballad form.

It’s a promising debut for a talented new ensemble.