Vicki Swan & Johnny Dyer, stalwarts of the folk scene as a duo have recently reconvened their project with Nick Hennessy, Seriouskitchen. They are currently touring their new project Whispering Road. We ask Vicki Swan what it’s all about. 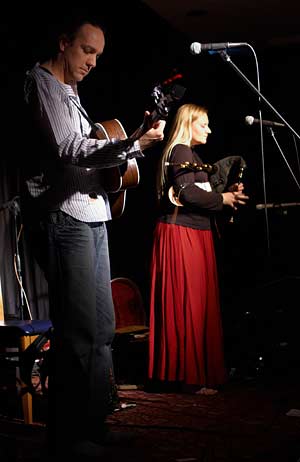 Where does the name Seriouskitchen come from?

It goes back to the days when we were changing our name as we altered from being a pub band to being a folk group. We met in the kitchen at Nick’s cottage in Cumbria and we were very serious. It partially came from an album name we nearly had, which was going to be Kitchen Sync - but we ditched that and it became the band name, Seriouskitchen. After all, where are the best parties held?

Your new show, The Whispering Road, is a tale of love and a ring. What is the inspiration behind the story?

The Whispering Road is actually an amalgamation of two Scandinavian stories. The first is a Swedish Story from a publication called Bland Tomtar och Troll, the story is called The Ring and was illustrated by the artist John Bauer.

Bauer is from the same the town that my family is from in Sweden and I’ve grown up with his imagery and stories. The fact that Nick chose it was a complete coincidence, he had the translated book and loved the story. I re-translated it to give a different perspective and Nick adapted it. The second story is The Troll with No Heart, which is from Norway. Nick took these two stories and blended them into one epic piece of work.

How do you source your material?

For the stories, Nick uses a whole variety of sources, from the oral tradition, from books, from all over.

The tunes from the show are all traditional nyckelharpa tunes, I’ve put in my favourite tunes that all nyckelharpa players the world over will know. The three major songs in the show have been written by Nick using either a traditional tune as the basis for the melody or using traditional Scandinavian ballad styles. The song that I sing is a lullaby that all Swedes were brought up with.

Is there any crossover between British and Scandinavian singing and storytelling traditions?

Absolutely. There is a very strong ballad tradition. The ballad collectors such as Sharp and Gardiner had their own contemporaries in Sweden (Afzelius, Arwidsson) and Denmark (Gruntvig). They corresponded all the time and there is a lot of crossover between the collections. Jamie Robertson translated Danish Ballads (1814) and many of these are found in the current ballad repertoire.

The languages are also connected and so there are a lot of storytelling links.

You say that the show is suitable for children 8+. How is it different from putting together a show for adults?

It’s not that different to put together a show for adults or younger people, especially when using the folk tale idiom. Schools is certainly something that we are considering and are taking it over to a primary school in Stockholm in May, which will be really exciting!

Do you have any plans to make the Whispering Road into an album? 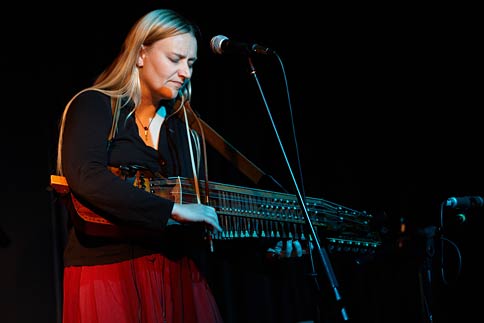 The three of you play an interesting range of instruments between them will they all feature in the live performances?

We’re not using our full range of instruments in this particular show. The intention was to include Swedish bagpipes, but in the end there wasn’t space. Maybe next time! The same was true of the willow flute. Jonny does most of the work with the most instruments to swap between. Guitar, accordion, bazooki, vocals and his cow horn.

We’ve been reading that Jonny plays the kohorn please tell us more.

The cow horn is one of the oldest communication devices, cow herders used it to send messages across the hills and dales. Different melodies meant different things. It’s basically a large cow horn, that you blow trumpet style into the small end, you change the pitch of the notes with three holes in the side and using your hand in the end.

It’s an incredible sound and Jonny has horns in different keys. They come freshly made, which involves boiling them, so they do smell for a bit when they arrive! I play the nyckelharpa and sing both in Swedish and English throughout the show.

You can catch Whispering Road at the following shows: