Riley & Garden: Beating a Path Between Folk and Minimalism

The folk music scene of the British Isles has two rising stars, two young and talented artists from the West Country whose sound spans traditional music to jazz, classical and cinematic scores. Their trademark is a surprising blend of two instruments from very different backgrounds; the vibraphone, having origins in the jazz scene of the United States, and the fiddle from the British Isles.

They have been so kind as to answer a few questions for Bright Young Folk readers.

How did you start playing your instruments?

Alex - I was very lucky to have violin lessons from a young age. I was inspired to learn because my Dad’s violin was always in the house and I was blessed to have two amazing classical teachers as I grew up, Jan Dobbins and Hywel Jenkins. Working my way through the grade system, I started playing folk music as a teenager as a way to maintain enthusiasm for practice. I co-founded folk duo The Drystones with Ford Collier when we were 15 and traditional fiddle playing ended up becoming my main focus and eventually my job when I graduated from university.

Harriet - I started learning piano super young from my Mum and Dad but didn’t come to percussion until I was around 11. My parents always encouraged me to listen to all sorts of music from all over the world; Indian classical, Balinese gamelan and African percussion so picking up percussion really worked for me - I’d always loved rhythm.

My school had a fantastic music department and the percussion teacher Kath Banks was an amazing inspiration, getting the state school to buy a marimba and in fact selling me her vibraphone which I still play to this day. My Dad is a jazz pianist so he firmly directed me to the sounds of Milt Jackson of the Modern Jazz Quartet and Ruth Underwood who played with Frank Zappa when I started learning marimba.

Who are the teachers and the artists that had the greatest influence on your individual playing and on your musicianship?

Alex - When I was studying for my degree, I had lessons with English fiddle and Viola d’amore player John Dipper who taught me all sorts about tone, phrasing and how to refine and develop my personal sound. He also introduced me to lots of English and Scandinavian ornamentation techniques which I use all the Time. I’ve been inspired over the years by lots of Celtic tune players too such as Aidan O’Rourke, Hanneke Cassel and Martin Hayes.

Harriet - My first teacher Kath was fantastic and inspired a whole host of other (particularly female) percussionists who went to King Edward VI Community College in Totnes. I then joined South West Music School (a virtual school which I’m now a mentor for) which provided me lessons at Wells Cathedral School with Jan Faulkner who sadly passed away from cancer just a few short years after I had lessons from her.

My teacher at Royal Welsh College of Music & Drama, Chris Stock, knows all there is to know about orchestral refinement which I’ve used throughout my career - from really caring about the sound of a triangle to bowing techniques on the vibraphone. I’ve been so lucky to have such dedicated teachers who have made me who I am today. 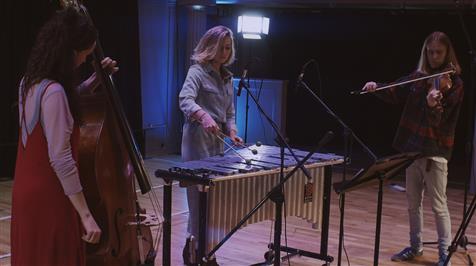 How did your collaboration start?

Back in 2018, we met through a training day for the amazing charity Live Music Now. We were attending as members of The Drystones and Spindle Ensemble respectively and decided to meet up again afterwards for some musical experimentation based around some tunes Alex had been writing - all in weird time signatures.

We quickly discovered a shared enthusiasm for the minimalist sounds we could make, framing the melodies with extended harmonies and having some fun with unusual playing techniques. We were very lucky to be able to use the main space in St Ambrose Church, Bristol for many of our early rehearsals, plus a video shoot in 2019, which contributed to the sonorous, dynamic way we play and had a big influence on how our album sounds.

One of the most curious aspects in Sonder is the choice of the titles for the tracks, all but one unusual words, mainly from the English language, such as Vellichor, the strange wistfulness of bookshops, or Nemophilia, the love of spending time alone in woodlands and forests, particularly at night. How did you come up with this avant-garde idea?

As our music is fundamentally abstract, and we both share a love of language, it felt natural to try to find unusual or archaic single-word pairings for the tunes. Originally, the idea was to use words which do not translate directly into any other language, however, we ended up with a much broader variety of words by the end.

The final track on the album breaks tradition with its much longer name Through The Paddy Fields. The title is taken from the penultimate chapter of a very inspiring book I was reading at the time of writing, Annapurna by Maurice Herzog.

Pairing fiddle and vibraphone was not a completely new idea, but you were the first to fully explore this combination and to unleash its potential. What are, in your opinion, these two instruments individual features that make their combination so fascinating?

Vibraphone and folk fiddle both share the ability to create very pure, hypnotic sound worlds. Tuned percussion as an ’accompanying’ instrument works to subconsciously remind the listener of more traditional instrument pairings, such as fiddle and guitar or fiddle and harp, whilst providing bags of new colour and flavour to the sound.

The repetitive nature of our music with its wonky time signatures and hypnotic rhythms translates onto these instruments into a vocabulary reminiscent of minimalism, jazz and experimentalism. Also, another advantage to the pairing is that the two instruments are opposites in terms of envelope control; the vibraphone is struck and gradually decays with a long, resonant sustain whereas, in contrast, the fiddle can be bowed to create any desired note shape.

Despite drawing on the vocabulary of traditional fiddle music, the vast majority of your repertoire is self- composed. How does the typical Riley & Garden track come together?

All of the tracks from Sonder started out in life as sketches in a large manuscript pad Alex keeps. Some of the melody fragments were simply figments of the imagination and others were, in fact, exercises I had designed to improve a particular fiddle playing technique - such as string crossing or a particular type of ornamentation.

We then meet up and work together to arrange them into a complete piece of music, drawing on Harriet’s expertise with extended harmony and unusual rhythms.

Which is the Sonder track that you feel best represents your musical experimentation? And why?

I feel that Shivelights has a lot to offer as a snapshot of our music making. It starts out with repetitive, minimalist undertones and explores a haunting melody which makes use of bright open string notes on the fiddle. The piece builds and falls in tension throughout and has moments of crashing, stark dynamics, plus it’s really fun to play - especially with Stevie Toddler on Bass.

We’re very excited to get out and play our music to people live, in-person again. We were supposed to have quite a few gigs in 2020 however, for obvious reasons, everything was postponed in spring.

Hopefully at some point in 2021 we will build on the success of our online album launch gig with an in-person performance at St George’s Bristol. We’re also really looking forward to working on some new material and perhaps get more instrumental collaborators involved...