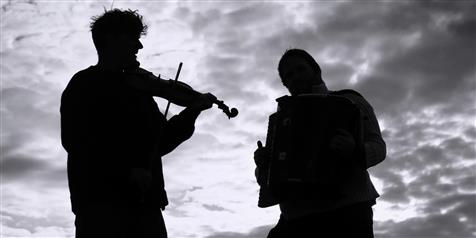 Fiddler Adam Summerhayes and accordionist Murray Grainger have created a new way to depict landscapes and stories. Their work under the name The Ciderhouse Rebellion have received a rapturous response and brought them under the national and international spotlight with appearances on the BBC and the Folk on Foot podcast.

The trademark of their musicianship is improvisation, often on the spot, a method that allows them to craft sublime pictures of the subjects they have chosen. Arguably, their most successful project is Genius Loci: surrounded by the nature and the landscapes they want to describe, they express the spirit of the place through delicate interweaving lines of accordion and fiddle, effortlessly taking the listener far away in space and time.

In the first chapter of this project, they concentrated on the White Peak in Derbyshire, whilst for the second one they pictured the stories and the scenery of the Rosedale valley in North Yorkshire and its mining past. That subject is also at the core of their most recent release, this time under the label Words of a Fiddler’s Daughter, with Jessie Summerhayes contributing poignant poetry and spoken word.

Their telepathic interplay is the most stunning feature of their recordings, from their debut album Untold, which includes two long recordings of exceptionally sensitive improvised music, to their more recent work, they have designed beautiful portraits of natural beauties and human stories with the same method that impressionist painters applied, opening an entirely new branch in the development of contemporary folk music.

They have been so kind as to answer a few questions for Bright Young Folk readers.

How did you pick up your instruments?

Murray: It was my father’s fault, he could see that I loved music and asked me to make a shortlist of the instruments I would be interested in playing. After a lot of research I came up with either the accordion or the bagpipes. He was a very intelligent man, so the option of the bagpipes was immediately deleted from the list.

Adam: It was always obvious to me - my grandpa played the violin and I thought he was great, so obviously I wanted to be like him and play the violin too. Also implicated in this are my parents, who put a tiny, 16th size fiddle on the pelmet above the curtains in my bedroom. If something is out of reach, its clear that you need to get it down and see what it does … 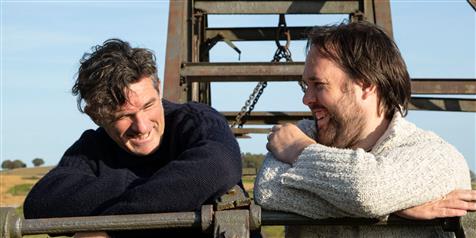 How did you meet?

Adam: Murray was doing a tour with a fiddler and a singer playing a show based on the life and songs of Edith Piaf. The fiddler became pregnant (not because of Murray) and suggested me as a possibility to fill in - we don’t know why, as I didn’t know her.

Murray turned up to a rehearsal in my kitchen and inexplicably refused the offer of cake. We next met at the first gig and didn’t have time to play several of the duo numbers before we went on stage - at which point we were amazed to discover that we could pull the music around as if we had been playing together for ever. We came off stage, looked at each other and, more or less in unison, said ’we have to play together’.

Why did you decide that improvisation was your natural way of describing the world?

Murray: Our reaction to having recorded our first improvised disc, Untold, which was the first time Adam persuaded me that we could just press record and let the music flow. When we listened back we were both startled and excited to find that the approach was allowing us to say what we had always wanted to say without the intermediary of conscious thought, of judgement, of planning, getting in the way. The beauty of getting rid of the middle man. 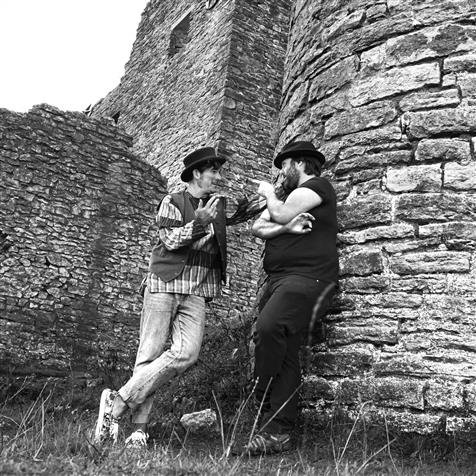 Can you explain us the process behind the creation of one of your albums?

For the Genius Loci discs we literally stand in the place we are playing, out in the wilds, sometimes have a 30 second discussion and (sometimes but not always) come up with a tiny description: ’dark and moody’, ’warm sad memories’, ’oh dear, there’s a lot of pollen here, sniff, sniff’, choose a key and then we just play. Or sometimes, we just play without even those beginnings.

The Fiddler’s Daughter disc tracks start with a ’it starts sad/happy/moody/desperate but listen out for [a certain phrase], at which point it becomes cheerful/suicidal’ from Jessie, then we choose a key and glue our ears to the words as she performs.

For Untold we just started playing…

The InCider Sessions were different: that was a telepathic miracle of playing together, half-heard through the crackle and distortion of a landline. That those tracks exist at all makes no sense.

You’ve taken in the Peak District and North Yorkshire so far on your musical journey - where’s next?

Our dream plans are to record on the Orkney Isles, both as Ciderhouse and with Words of a Fiddler’s Daughter, or failing that to record in the Gulf of California on a boat with an old friend of mine, Christopher Swan - surrounded by Blue Whales/Humpbacked Whales/Dolphins Pelicans etc …

There are historic sites in Southern England such as Avebury and Stonehenge that we’d like to get to - and we’re interested in the idea of looking at the ancient kingdom of Wessex, as suggested to us by a friend.

What it actually turns out to be will probably be dictated by time, opportunity and a spur of the moment idea.

We are interested in doing a Genius Loci recording on planet with a helium based atmosphere - Jupiter or Saturn seem ideal - to see what effect it has on the sound waves.