It’s been three months now since Treacherous Orchestra unleashed their devastating new album Grind on an unsuspecting public. Recieved to critical acclaim from both journalists and concert-goers alike, the band now find themselves on the road with their equally devastating live show. In fact the live show is SO devastating that the night previous to meeting up with the band they’d almost had their Cecil Sharp House show pulled due to the volume going way past 11 on the in-house decibel metre!!

Before their Saltaire show we sat down with Bass/Synth maestro Duncan Lyall and Bodhrán aficionado Martin O’Neill to see what the reaction’s been like since Grind hit the streets...

Ducan Lyall: "It’s been really positive yeah. For some people, they’ve said they like the band but weren’t totally sold on the first album and Grind has been a game changer for them and a real step up. Although it’s still a studio album I think we’ve captured a bit more of that live energy on this record. We’re certainly more mature as a band so we maybe know how to do that a bit better now."

Martin O’Neill: "I think that sense of maturity has really come across on this album. We used to be known, and in some respects still are, as a party band and it was all a bit of craic and shenanigans. People didn’t really know what to expect from this wild bunch of Scottish musicians. Because of that I think the first album was a bit sporadic in terms of ideas but I think we’ve all just gelled as a band now. It’s a bit more cohesive and we’re much more on the same page. It’s definitely a snapshot of our headspace at the time we recorded it." 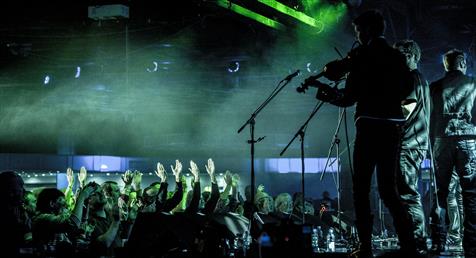 That collective headspace counts eleven-plus touring members - how on earth does such a large collective stay on the "same page" when it comes to writing, arranging and recording something as big and bold as Grind?

Martin: "When we’re writing and recording we all try to be respectful of each other’s opinion. It’s key that we’re all open to different ideas. Now and again one of us will come up with a tune and it’s maybe not that well thought out or not that well developed and that gets dismissed, but usually most ideas get looked at and everyone’s very supportive of that. It can be difficult to make everyone feel comfortable doing that as obviously some of the characters within the band are bigger than others and there have been odd times where we’ve fallen out."

Duncan: "It’s often the case that the loudest voice will win. Everyone brings different strengths to the table which is one of the greatest things about the band. Where some of the guys might be brilliant tune writers and bring these ideas already developed, some of us aren’t really tune writers but we bring arrangement ideas or rhythmic ideas to the band."

Martin: (grinning) "Some of us just bring good looks to the band of course."

There’s a tremendous sense of fun surrounding Treacherous Orchestra and live it’s impossible not to be sucked in by the positive energy emanating from the stage. To look at the band in full flow doesn’t immediately shout ’Celtic Folk’ though. Both the sound and the imagery has a definite grit and heaviness about it. It would appear this was no mere accident...

Duncan: "Yeah it was absolutely deliberate. The first album was a collection of things we’d put together over a number of years in different guises and from ceilidhs and sessions etc. With Grind we did kinda set out to hone this sound and the sense of place and identity was really important. We wanted to record music and put on a show that really flies the flag for where we’re from. The kinda heavier sound really suits that and we do like to make a bit of a noise so it all fits."

Martin: "Being Scottish and coming from an area that’s all about industry and shipbuilding and the steel works, there’s a sense of belonging and a sense of our own identity that we get from our locality. You can hear it in the music and you can see it in the show. We don’t do boldness for boldness’ sake. We didn’t set out to market the band as doing something really controversial. You’ll agree if you see the show that the imagery and music go hand in hand and it’s not just a cynical marketing ploy that’s meant to be twee and folky." 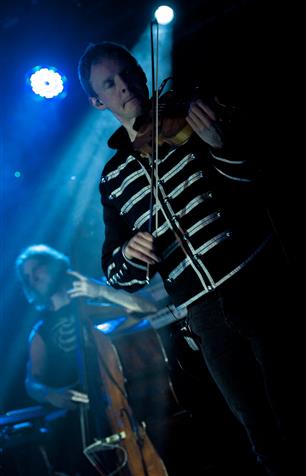 But how do you pull that together from a collection of individuals we wonder?

Martin: "Myself and Duncan have been playing in bands together for 16 years. We both have very eclectic tastes and play different styles of traditional music. I grew up in a purely Irish trad music background and then went on to study music and pick up on different styles and ideas. Duncan comes from completely the opposite but we’ve shared a lot of things and we have a lot of similar interests in music and we’ve studied together. The rest of the guys in the band will tell you similar stories. They all have a traditional background but it might be highland piping or west coast fiddle playing or whatever and then you’ve got all these other influences. We are very much a product of what’s come before and our influences as a whole."

Being so unique both musically and stylistically within the traditional music scene are the band aware of the ’game-changer’ status they may have found themselves with?

Duncan: "Most of the guys in the band are interested in doing something that’s different and I wouldn’t want to say that we’re the only people doing something different - I suppose it’s just our own kind of different. I guess anyone that’s unique will end up influencing other acts and you’ll have people who’ll copy that style. We’ve done the same ourselves - we’ve been influenced by styles and music that has affected us. Whatever we do though, what we would always be looking to do is something that is unique to us." 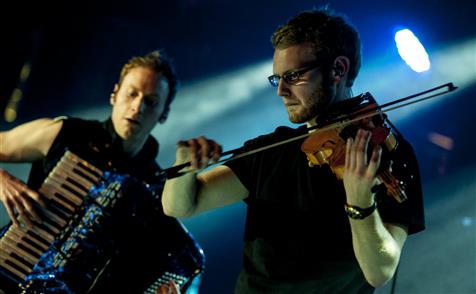 So have thoughts turned to the next bout of recording then?

Martin: "We’ve started talking yeah. The production element of the show has gotten bigger and we’ve started experimenting with electronics and stuff. We’re thinking of getting in the studio towards the back end of the year and coming up with some ideas and again it’s an open door for everyone to bring in their toys and see what works and find the new direction within the band. See what headspace we’re in really."

Having watched the blistering live show later that night what’s for sure is that the release of Grind means the traditional folk scene may never be the same again. 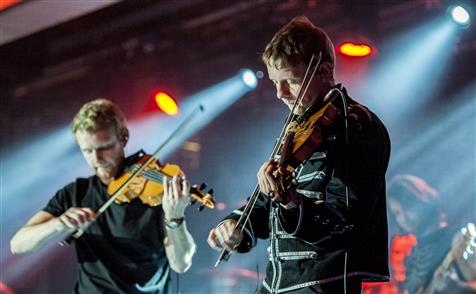