A new Side to Kathryn Tickell

Kathryn Tickell has been around on the folk scene for many years: well loved as an exceptional Northumbrian piper and fiddle player and a favourite at festivals and events both in the UK and world-wide.

Having previously collaborated with a whole host of exciting and diverse musicians, Kathryn has been working on a new album with a brand new ensemble, The Side, featuring Louisa Tuck, Ruth Wall and Amy Thatcher. In the midst of the new release and the band’s Autumn tour, Bright Young Folk ask Kathryn a few questions about her new project. 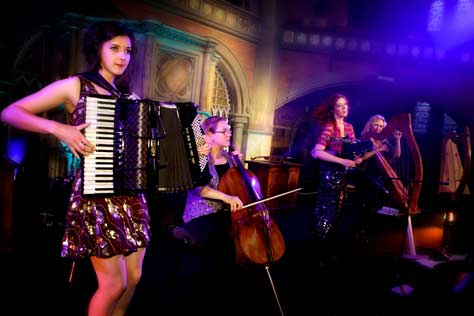 Kathryn Tickell and the Side is the name of your new ensemble - but going back to the beginning, can you tell us a little about your decision to begin playing the Northumbrian Pipes, something that has lead to a successful musical career and other significant achievements along the way?

I started playing the pipes and fiddle when I was about 9 years old. I already played the piano and the tin whistle but I was desperate to learn to play the fiddle. Strangely enough the pipes were more of an accident, but when I got going with them I discovered that I seemed to have an affinity with the instrument.

I had been brought up listening to the traditional tunes and songs of Northumberland so that definitely helped me - my parents lived down in Lincolnshire for a while when I was little, and I think that the music was something that made them feel more connected to home, so my dad was always singing Northumbrian and Geordie songs around the house, and sometimes the Border Ballads (which tended to be a bit bloodthirsty - they used to give me nightmares!)

My Mum played the concertina, so she used to play tunes too, and they all had names that were connected to the Northeast - Sweet Hesleyside, Rothbury Hills, Durham Rangers, and things like that. I suppose I was a bit indoctrinated with Northumbrian culture (which turned out not to be a bad thing!) When we moved back up North I started learning the pipes and fiddle and discovered that I already knew lots of the tunes in my head, and if you know the tune in your head it’s not so difficult to work out how to play it on an instrument.

As for it becoming a career - all the time I was at school it never even occurred to me that I could be a professional musician - it wasn’t the typical career path for people I knew. In my family people would tend to be a farmer, a farmer’s wife, a teacher or a nurse, so it was a bit of a revelation when I suddenly realised that perhaps music could be an option!

At what point and where did The Side come about?

I first had the idea for The Side while performing at a prom concert at the Royal Albert Hall! The Royal Northern Sinfonia were also playing and Amy and I were watching them and were really inspired by Louisa’s playing, even in the middle of an orchestra her brilliant playing and her commitment to the music were really apparent. And she was happy to hang out with the folkies and drink wine - so that was a good start!

When we got home Amy, Louisa and I locked ourselves in a practice room at the Sage Gateshead and spent some time trying to play music together, and trying to get a sense of what sort of music that might be, bearing in mind our very different musical backgrounds and influences.

We soon came to the conclusion that we wanted this to be an ongoing collaboration, but we wanted another sound in there - something ’plinky’ that could add a bit of sparkle to the sonorous tones of the cello and accordion, so that’s how Ruth (and her harp) came to be in the band! 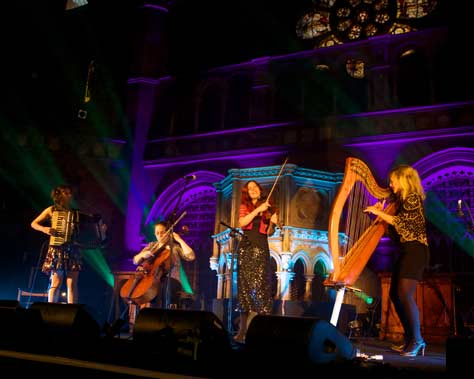 Two of the musicians, Louisa Tuck and Ruth Wall,  in The Side have a predominantly classical musical background whereas yourself and Amy Thatcher are more familiar with traditional music.What has inspired you to collaborate with musicians of different musical disciplines?

Well, I think that’s what makes it so exciting for us, we can’t predict what musical ideas the other band members are going to suggest and that leads to new musical avenues being opened, for all of us.

Also, we are all interested in different types of music, so it’s good to see that starting to come out in the band sound. And having Louisa in the band meant that we did actively look for a harpist who wasn’t  from the folk scene, Amy and I know loads of really great Scottish harp players, but we thought that if we asked one of them we would end up with "a folk band with a cello in it" and Louisa feeling a bit like the odd one out.

Having Ruth is great, because she has a strong classical background, has worked with lots of contemporary jazz and classical ensembles, has toured extensively with Goldfrapp, and was also brought up in the Scottish highlands, where she did hear traditional music being played, so she has a sensitivity towards that too.

What was your main objective with the new ensemble? Did you hope to address a new musical direction which differed from your previous collaborations?

We just wanted to make music that we like and that we want to play. I know that sounds a bit obvious, but really that’s the bottom line. 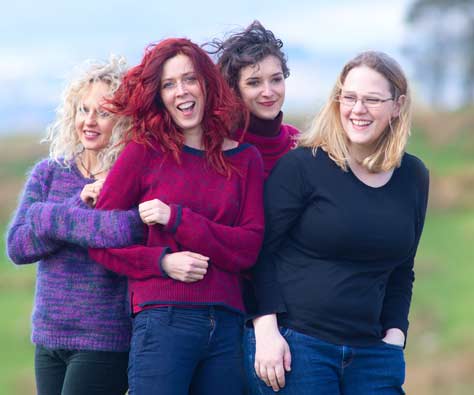 Did the range and versatility of the musicians influence the genre and character of the music and songs you decided to work on for the album?

Yes, of course those things affect the material. We didn’t start off with a blueprint of the type of repertoire we wanted to play though. We just rehearsed until we had enough tunes for a concert and then went on tour. The album has a lot of those tracks on it plus some new ones that were composed especially for the album (like the track with the Bray harp on it - we don’t tour with the Bray harp, but we really wanted to get the sound onto the album).

And also the song, Amy and I are not exactly seasoned singers, it’s still a bit new for us, and we didn’t want to do an existing song where half the audience would be going "nice song, but it’s much better when Dick Gaughan sings it" or June Tabor, or whatever.

So we solved that problem by finding an old poem and setting it to music ourselves. Whatever you think about that song at least you haven’t heard other people sing it better. Yet!

A lot of your music is influenced by history, notably the people and places of Northumbria, how do you manage to capture this in the tunes that you write?

The traditional music of Northumberland and the borders is so much part of my musical language that I don’t think I’d be able to eradicate it completely even if I wanted to (which I don’t - I’m very happy to have that ’flavour’ to my music, it feels as if the music has a Northumbrian accent. I like that!)

You’ve been involved with other genres of music - such as jazz - during your career, does this play any part in the development of your musical style and the tunes that you write?

I think it all influences me in some way, but it probably isn’t always apparent. And sometimes I do consciously take an idea and apply it to the music, but hopefully by the time all of us in the band have worked with it for a while it ends up sounding like us, like me and The Side, and not just a hotchpotch of different influences, material and ideas, even though that might be how things start off.

We’re all pretty strong minded women in this band - so ideas get bandied around, pulled apart, worked on, argued about, put back together, altered again etc etc until we’re all happy with it. 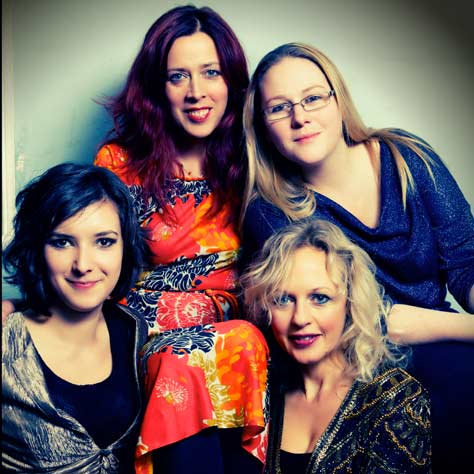 Kathryn Tickell and The Side have commenced their tour and will be playing at the following venues over the Autumn: