Flook: Celebrating Twenty-Five Years at the Forefront of Folk Music 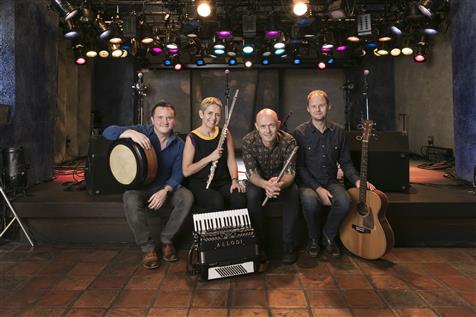 After more than a decade since their fourth album Haven (2005), Flook came back to the recording studio in 2018. Ancora (2019) is the fruit of their renewed collaboration: the result is an amazing album, full of drive and energy in pure Flook style, with some memorable meditative moments.

Brian Finnegan, (whistles and wooden flute), Sarah Allen (flutes and accordion), John Joe Kelly (bodhràn) and Ed Boyd (guitar and bouzouki) took a break in 2008, dedicating themselves to other projects and making just sporadic appearances together on TV and radio shows.

In 2013 they started to play together again at many festivals, touring the world with rapturous responses: apart from renowned venues in the UK and Ireland, they have played abroad. Russia, Italy, Denmark, Japan and Germany are just some of the countries they enchanted with their sophisticated skills, their distinctive sound and their captivating style.

They will perform at Celtic Connections 2020 in Glasgow, on 25 January, in an event that will also feature four of the guest musicians on Ancora.

2020 marks the twenty-fifth anniversary of the foundation of this iconic band, but Flook still look and sound fresh, a true example for the entire folk music scene with their vitality, spreading the notes of Celtic music far and wide around the world.

They have been so kind as to answer a few questions for Bright Young Folk.

Flook have become a true inspiration for many young musicians and composers; who were the artists and which were the genres that had the greatest influence on your early years as a band?

The Bothy Band and Planxty had set the benchmark for many musicians back then, and Matt Molloy in particular was a huge inspiration to us. We all loved and listened to a lot of Breton music - musicians such as Jean-Michel Veillon and Soig Siberil - and the Indian ragas and talas of Hariprasad Chaurasia and Zakir Hussain.

Add to that plenty of music from Hungary where Brian had spent some time prior to Flook, and lots of jazz/pop/rock - anything really that sparked our interest!

What made you realise it was time to reform back in 2013?

We never really went away, we just stayed very quiet for a few years! We definitely needed a break, for all sorts of reasons, and everyone was happily raising families and exploring other musical collaborations, but we always knew that when the time was right we’d be back.

We were often asked to get together and play, and when we eventually did it was just the same, the old magic was still there. We also knew, though, that if we did too much it would spoil, so we took it very slow, not taking everything that came our way.

So we built up our touring again very gradually, and finally decided the time was ripe to make another record. Even from that moment, Ancora was a very long time coming, but hopefully it was worth the wait. 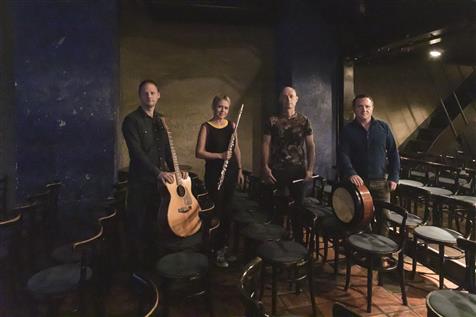 Is there a track of one of your albums that you feel best represents the spirit and the inspirations of the band, and why?

It’s hard to pick any one track, but Wrong Foot Forward would certainly be a contender. This set of tunes has barely ever been off the set list since its inception in around 2003 - we tried leaving it out at the start of our Ancora tour last year, but we missed it so much that it was quickly reinstated!

The first tune, written by Sarah and Brian, starts slowly in 7/8 time and builds up gradually over rolling guitar and beating bodhran, with the flutes and whistles weaving and spinning in and out and around each other. We then fire into a blast of 2 fast reels, one written by Brian after an epic Flook journey along the Great Ocean Road in Australia, the other by Cork piper Brendan Ring. We have often started our shows with this set, as it introduces all the elements, all four voices; it gives everyone space to be heard, to act and to react - in pairs and altogether as 4.

What are the most memorable moments of your tours abroad?

There have been so many memorable moments, but some that spring to mind include chasing the sunrise and kangaroos at dawn with the Bevingtons in Australia, staying up all night playing tunes at McCarthys of Baltimore in West Cork, birdwatching and snowy landscapes with Makoto Ando and family in Hokkaido & any number of other special times with our dear friend Yoko in Japan, driving up the west coast of America through the giant redwoods, truly beautiful gig backdrops in Italian castles and small town squares - the list could go on forever...

Is there a difference in the way audiences in other countries respond to your music compared to the UK and Ireland? And do you approach gigging differently as a result?

Historically, our shows in Ireland were the nights we felt belonged to the spirit gods of music, as a tune band maybe that had to do with feeling much closer to the source. However, in the past 5 years we’ve played some shows in faraway corners that were every bit as memorable.

The first few times we visited Japan, the attention was unnerving, but on our last visit in autumn of 2018, it was a bit of a riot, that static in the air that crackles at great gigs. Similarly, our final few shows of 2019 were such a treat, we played Prague, Moscow and Saint Petersburg on consecutive days and they were some of the best shows we’ve played all year.

Contemporary forms of music such as rock and jazz have a great influence on modern folk compositions and on traditional music arrangements; do you feel that folk music is having a similar effect on those genres?

Certainly there’s curiosity occasionally from the rock, pop or jazz world, with an ear to incorporating elements of traditional music into their sound, but it’s a delicate balance getting it right and more often than not, the result seems overly contrived. However, when an artiste has a grounding in folk or traditional music, you hear melodically that influence very naturally in their writing or playing.

Artistes like Bon Iver, Mumford and Sons, or the wonderful Edinburgh jazzers the Bancroft brothers’ TrioAAB - their writing is quintessentially full of folk melody. The remarkable quality in folk and traditional music is its lovely organic ability to shape shift so fluidly.

Twenty-five years after starting, twenty-three years from your first album Live (1997) and with other four studio albums and numerous awards under the belt, how do you feel the band has musically developed during this amazing journey?

I guess the evolution of a band, especially one that writes and plays original music, is best experienced in the depth of emotional connection to that music as it changes over time to reflect the life of the band. Every tune has a story, and we as humans connect to one and others stories because we find comfort or inspiration in them and a few answers to some big questions.

In the 14 year break between our last two albums, 5 children came along and a whole heap of life besides, so Ancora is the story of those years and what influenced us and inspired us along the way, the convergence of the life and a revitalised band you might say.

We’re very content doing what we’re doing right now, we play the concerts we know are extra special or we accept invitations from places we’ve had an eye on but have never played before. When you’re young and full of spark and drive, you move at bewildering speed and often don’t realise, the allure of the motion is so seductive.
But we decided a few years back that we didn’t want to work that way anymore, so we’re more selective and know how much is just enough. And we’re loving playing again, genuinely burning bright, happy to take what comes a gig at a time.