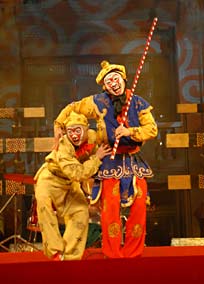 This is part two of our extensive two-part interview with Damien Barber about the Demon Barbers’ recent trip to The Yangtse River Arts Festival in Wuhan, China.

When you play abroad are you touring on an established folk music circuit?

To be honest this is only the second time we’ve been overseas, the first was in Belfast a few years ago. The Belfast trip was a one off performance and the China one was mainly for the Yangste River Arts Festival. When we agreed to go we were offered the opportunity to perform at some clubs around Wuhan and we agreed. This certainly wasn’t part of any established folk circuit and we had no idea what we’d let ourselves in for.

The language and cultural differences were strained to the limits on the second day. We were all exhausted from the flight and hadn’t really adjusted to the new time zone when we went off to the first venue for our sound check. At least that’s what we thought it was, in reality it turned out to be an audition.

The club was distinctly ’different’ to our average English venue. The room probably held around 1000, seated on two levels, there was a 100 foot long raised catwalk down the middle, the stage was glass with under-lighting and red neon lights were abundant. Above the stage was a video screen with semi-naked western girls strutting their stuff - the spice girls etc. The club was called The Rolling Stone. We were ushered in and taken to our under lit and over comfortable dressing rooms, something wasn’t quite right but we couldn’t put our fingers on it. There were around 20 of these rooms down both sides of the venue and they had numbers on the doors, inside were sofas, a low central table and a TV; none of us were prepared to admit what we thought the rooms might be used for. We were most definitely out of our comfort zone and so we got on with what we knew best, setting up for the gig.

While we were ’sound checking’ there was a heated debate involving the clog dancers and the management. The girls were trying to establish whether it was safe to clog dance on glass while the club owner, Mr. Lee, was more concerned with what they were wearing…or more poignantly how much they were wearing. After a good half hour of insisting that our girls were incredibly modest and had no intention of wearing their (very short) shorts without tights we all agreed to down tools until we’d established what sort of club this really was. We went back later that night and all was revealed, in some cases quite literally, but not as badly as some of our imaginations had led us.

It was a variety show; Karaoke singers, dancing girls, martial artists, comedy acts and even a Russian guy whose act mainly comprised of strutting the catwalk and challenging lesser men to down jugs of cocktails. This was our second major cultural shock for us, to be a ’real’ man in China you must be able to drink vast amounts of alcohol and drink it quickly. This ability is so crucial to the idea of masculinity that it’s said that business men are seldom successful unless they are able to hammer home a good dozen bottles of beer at the end of a meeting. Luckily for us some members of the Roadshow could not only drink vast amounts of alcohol at great speed but could also match the strutting and groin grinding spectacle that was on display before us. As we were honorary guests of the club (complete with spot lights and announcements from the MC) it was fortunate that these members were able to take one for the team! (Our drummer, Ben. was actually offered a 2 month contract by Mr. Lee to work in his club as a drinking, dancing ’English Hero’). The changing rooms, incidentally, turned out to be karaoke rooms.

The next day we returned to the club to work out if and how we could fit into the next evening’s entertainment. We decided that the best thing would be to perform the Rapper and choreograph the clog dancers into it. We did two clubs that night and were received with bemusement and rapturous applause on both occasions.

The second performance was a high point of the trip for me personally as I ticked off one of my life time ambitions - entering from beneath the stage on a rising platform complete with smoke and lasers. That night we celebrated our performance into the early hours. The next day we decided the Wuhan club scene wasn’t really for us and took up our second role, as tourists, with great enthusiasm.

What plans are you brewing for the future?

Our main focus this year is improving the Roadshow and recording a new album in the Autumn ready for a Spring 2010 release. We’ve got 75% of the new material ready and somehow we need to find time between all the festivals to work on the rest!

We also have a new member, John Stuckey, whose beatboxing is the perfect accompaniment to the clog dancers. We first came across Johno when he auditioned for the pilot of a new theatre show we’ve been working on for the last couple of years and this summer he’ll be performing at the majority of festivals and gigs with us.

The new theatre show is steadily coming along. We’re now awaiting an Arts Council decision on funding that will take us to the next stage - creating a full length show fusing traditional and street dance. If all goes well we’ll be rehearsing all winter and will aim to launch the show in April/May next year…fingers crossed! 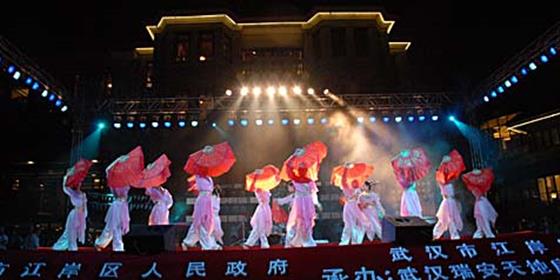