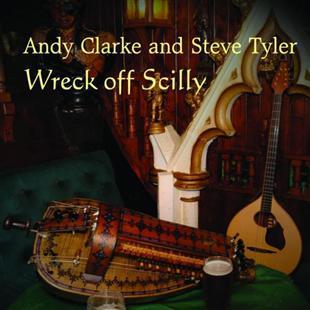 Andy Clarke and Steve Tyler’s Wreck off Scilly is firmly rooted in English tradition with songs collected by Baring-Gould very much in evidence. There are also instrumental forays to France, Canada, Spain and Denmark. Andy plays bouzouki and guitar and Steve the hurdy-gurdy and cittern. They are joined on some tracks by Ruth Clarke on fiddle.

The hurdy-gurdy is the star of this album, and in the able hands of Steve Tyler, proves to be an extremely versatile instrument. It can sound joyful, miserable and even downright sinister. In a dance tune, it makes you want to get to your feet. The vocals on the album are always crystal clear, essential when so many of the songs tell a story.

The subject matter of the songs is varied, from social comment (The Coal Owner and the Poor Pitman’s Wife, Poor Labourers), the supernatural, (Cold Blows the Winter, Childe the Hunter), to the sailors lost at sea, and even competitive bell-ringing!

The opening song, The Coal Owner and the Poor Pitman’s Wife, was written by a collier during the Durham strike in 1844. The hurdy-gurdy drives the song forward, emphasising the defiant nature of the song. The song is from the mid-19th Century, but the hurdy-gurdy takes us back much farther in time. There is more social history in Poor Labourers, lamenting the lot of farm labourers. The fiddle has lovely solos in between verses.

The songs are punctuated by several very different tunes - The Wendigo is a tune by Steve, inspired by indigenous Canadian mythology. It has a discordant and sinister opening before launching into a danceable tune. Half Hannikin is a stately and dignified Playford tune. Mariam Matrem is a 14th century Spanish tune, gentle and courtly in style, in which the hurdy-gurdy demonstrates its lyrical ability. Midnatspolska/Morgenspolska are two tunes by a Danish nyckelharpa player, with delightfully syncopated rhythms and changing time signatures - a challenge to dance to, but an exciting listen.

We dip into the supernatural with Childe Harold and Cold Blows the Winter, both collected by Baring-Gould, and in which the hurdy-gurdy adds ghostly and mysterious effects.

Listeners will find Rosemary Fair familiar, with new words to an old Irish tune. It is a variation of Scarborough Fair, from both the girl’s and boy’s point of view, in which the girl replies to the boy’s demands. Far more nonsense than in the more familiar version of the song.