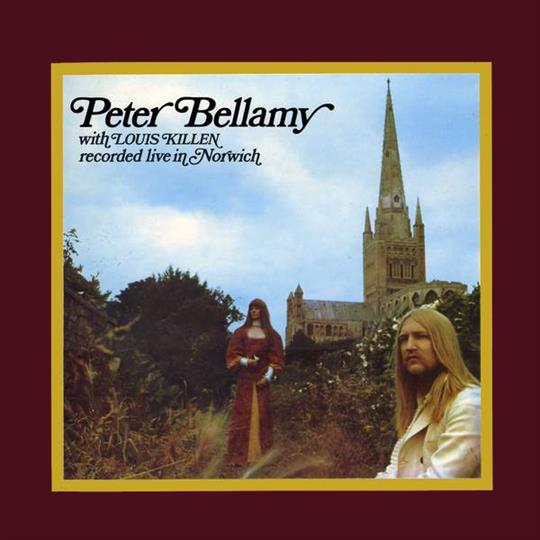 ’All you people who remember how the Copper family sing it; forget it.’

This welcome reissue of Won’t You Go My Way fills a very important gap in Bellamy’s discography. The album, recorded in 1971, is one of only two that document Bellamy’s singing in a live context. Recorded before an invited audience at the Folk Studio in Norwich it’s a time capsule of folk singing in the 1970’s.

Won’t You Go My Way is a collection of ten traditional folksongs, two Bellamy compositions and two, forgettable, tin whistle solos. Bellamy is joined on three tracks by Lou Killen and on five songs by the audience, who are in excellent voice.

The traditional songs recorded here were all staples of Bellamy’s repertoire. He opens with the bawdy Butter and Cheese and All which immediately confronts the listener with Bellamy’s unique singing style. The voice is a nasal vibrato which skips and slides over the lyrics, emphasising some words, rushing through others and pausing in the oddest of places. Not for nothing did Borfolk anagram his name as Elmer P. Bleaty. For someone used to the smooth singing of most contemporary folk artists, it can come as a bit of a shock.

The ear soon adjusts to this style of singing and many listeners will enjoy hearing again, or for the first time, Bellamy’s versions of such folk staples as Here’s Adieu Sweet Lovely Nancy, On a Monday Morning and The Sweet Nightingale.

There are no less than four songs from the Copper family on this album. It might be invidious to single out just one piece but the singing of Spencer the Rover, sung with Lou Killen, is particularly fine.

Another highlight is the sea shanty medley that closes the first half of the concert. This spotlights the contribution made by the audience who add harmonies to the choruses. Their no holds barred singing is impressive even when they slow down the chorus of The Alabama to a crawl. It puts one in mind of a particularly good singaround at a folk club and there’s nothing wrong with that.

Bellamy closes the album with one of his signature pieces, Yarmouth Town. In many ways this captures Peter at his best. He has a knack for capturing the mood of a comic song such as this. Here regular rhythm and meter takes a holiday as Bellamy speeds up and slows down, singing some lines quickly whilst dropping down to a speaking voice in other places. No wonder the audience cry for more.

Won’t You Go My Way is not just an album for the Bellamy completest, it can be appreciated and enjoyed by anybody who has ears to hear. As the man said; listen without prejudice.