Various Artists - Way to Blue - The Songs of Nick Drake 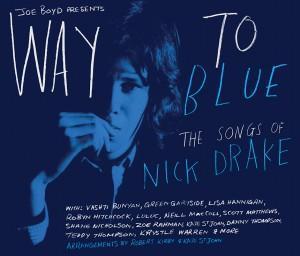 Recording an album of another artist’s material is always a risk, but Nick Drake’s original producer, Joe Boyd, has gathered together a group of musicians who he feels can do justice to the music. The album was made from live recordings.

One particularly striking voice is that of Zoe Rendell, who with Steve Hassett form the duo Luluc. Their version of Things Behind the Sun begins with guitar accompaniment, gradually joined by strings and woodwind, enriching the texture without overwhelming the vocals. They also perform the song Fly and join Lisa Harrison on Saturday Sun.

Lisa’s voice has a much harsher quality but this fits well with her emotional performance of Black Eyed Dog. In sharp contrast, Robyn Hitchcock’s voice is similar to that of Al Stewart and gives the song Parasite a retro feel.

Another stand out track is the beautifully gentle piano instrumental One of These Things First. The combination of piano and bass from Danny Thompson and Zoe Rahman works really well.

Because of the range of musicians, there is inevitably some variety in the arrangements from the rich orchestral strings and solo oboe of Fruit Tree (sung by Green Gartside) to driving guitar accompaniments, which is what would be expected from Teddy Thompson in his rendition of Pink Moon with Krystle Warren.

Other musicians involved are Vashti Bunyan (the only performer on the album who actually knew Nick Drake), Scott Matthews and Shane Nicholson.

Those who are already familiar with the music will no doubt make comparisons with the original versions, but it is also worth listening to these songs independently from those memories to see if they stand up in their own right.

What will the Nick Drake afficionados make of this? Hard to say, but keeping the memory alive can only be a good thing.

While the musicians involved are undoubtedly very skilled at what they do, the album fails to inspire. Although the arrangements of the songs are quite varied, the actual tempo and mood varies very little.