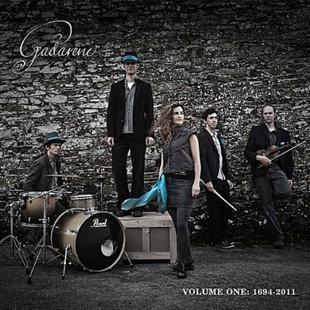 Not the snappiest of titles for an EP, but it does what it says on the tin. The EP consists of obscure tunes, sourced from 18th and 19th century manuscripts, and given a funky new lease of life.

Band members Nick Wyke, Laurel Swift, Jon Dyer, Matt Norman and Si Paull play a combination of fiddle, mandolin, flute, double bass and drums. All but one are very active in the folk scene, and their combined experience has produced an interesting and exciting CD.

Gadarene take simple dance tunes and embroider and embellish them until they are almost unrecognisable, but just when you think the original tune has disappeared without trace, it comes back again - this is especially evident in the first two tracks on the EP, Alister and Barley Raking. This process continues in The Triumph which has hints of Eastern European influence in its delivery, as it builds to a frenzied climax.

There is a mesmeric quality throughout this EP - so if you’re planning to hold a folky rave, this is the music you need! And the fact that “Volume 1” is part of the title implies there is more to come - let’s hope so.