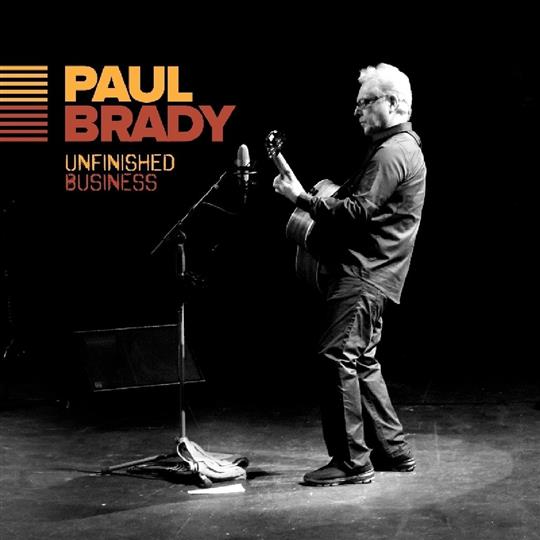 Unfinished Business is Paul Brady’s new studio album, the first in some seven years and incredibly his fifteenth solo album. Spanning over five decades, his broad and eclectic mix of styles and influences are his trademark in the contemporary Irish music world.

Sporting an impeccable folk pedigree including Planxty and the Johnstons, it is as a solo artist that Brady brought a creative approach to exploring musical influences and boundaries. In Unfinished Business he brings forward nine new and two traditional songs in an album that explores where tradition meets contemporary and folk meets country, funk and rock.

Retracing historical folk roots Brady expertly reworks the Child Ballad Lord Thomas and Lady Ellender, learnt from the singing of Mike Seeger. His interpretation of this traditional song is fresh and new with effortless vocals and alluring harmonica and guitar accompaniment. A refreshing new take on this old song.

Brady’s skills as a songwriter and musician are particularly well-showcased in Maybe Tomorrow, with vocals, mandolin, accordion, whistle and electric guitar combining together to produce a very full and satisfying sound.

With engaging electric guitar riffs and distinct country music influences, I Love You but You Love Him, tells a contemporary story of love in a song which greatly appeals on both a musical and lyrical level. The exploration of contemporary and traditional themes and styles is consistent throughout the album.

The Cocks are Crowing, a traditional Irish love song, is treated to a laid back and wonderfully relaxed interpretation and delivered as only Brady can. Soft and unobtrusive guitar and keyboards complement the smooth vocals and open up into harmonica and accordion phrases which juxtapose the gentle theme, bringing both light and shade to this engaging track.

Unfinished Business will delight existing Paul Brady fans, with his signature vocals and expertly crafted songs, but more than that it will appeal to those who enjoy an eclectic and diverse approach to contemporary and traditional music, fusing different genres in a way that absolutely works.

Those new to Brady’s music may find themselves pleasantly challenged and surprised by the variety of styles and themes explored in this thoroughly enjoyable album, conceived and created by an iconic singer, songwriter and multi-instrumentalist, who has consistently been at the very top of his game for over half a century.

Released on 8 September 2017 on Proper Records.

1. Unfinished Business
2. I Love You but You Love Him
3. Something to Change
4. Say You Don’t Mean
5. Oceans of Time
6. Harvest Time
7. The Cocks are Crowing
8. I Like How You Think
9. Maybe Tomorrow
10. Once in a Life Time
11. Lord Thomas and Fair Ellender