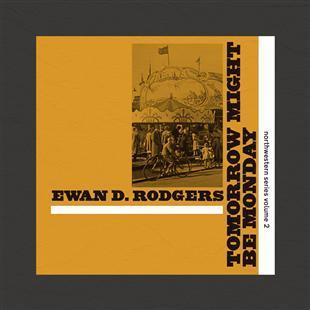 Folk Police Recordings have once again come up with the goods. And ’the goods’ in this case is the provision of a musical outlet for Ewan D Rodgers, small-town Yorkshireman and fabulous musician and banjo player.

Tomorrow Might Be Monday is the second release in Folk Police Recordings’ Northwestern Series of numbered, limited edition albums with artwork and design by Dom Cooper. It is fabulously dark sounding album considering the fact that Ewan D Rodgers’ most tangible influences on the album are Jansch, Renbourn and Graham. Rodgers revamps Blues numbers whilst yet adding something more twisted, leaving a darkness which still remains.

Tomorrow Might Be Monday has a brilliantly atmospheric opening in Il Valtzer Dei Disertori, which begins with some simple banjo notes and an accordion chord but slowly grows. It is reminiscent of haunted, grey, sea side resorts, then once the tambourine comes in it morphs into something more Romany-esque, but still as ploddingly gentle and beautifully sad.

The album them starts to warm up a bit on track two, as the banjo and accordion are swapped for the guitar and vocals. Blue From The Cold is a blues tune with simple instrumentation and vocals. As lyrics goes it is thematically like an acoustic, country, Beatles song, he’s ’got a girl who still won’t phone’ but ’she tells [him] that she’s not [his] girl, not today.’

Tomorrow Might Be Monday seems to be heavily influenced by Blues and Bluegrass and a significant proportion of the album are direct products of this. Come Back Babe is one of the less satisfying of these on the release, but I Don’t Love Nobody’ is a more swinging version of the bluegrass classic and also features a fantastic kazoo solo - a phrase not used anywhere near frequently enough - which adds a brilliant touch of frivolity to the proceedings.

The most atmospheric track on the album is Tumbalalaika. Tumbalalaika is a Russian Jewish folk and love song which Ewan sings, fantastically, in Yiddish. Unfortunately, an inability to speak Yiddish lead to researching the origins and meaning of the lyrics: it is about a boy asking a girl several questions such as; ’What can grow, grow without rain? What can burn and never end? What can yearn, cry without tears?’

Not being able to understand the lyrics in no way diminishes the appeal of the song however, as from the soulful longing of his voice the ache of love is painfully apparent. The ghostly atmosphere and the delicate fiddling juxtaposed against the plodding accordion is straight from a black and white film and is less Fiddler On The Roof and more gulag labour camp. It is spookily beautiful and seriously eerie.

Paper of Pins is a fantastic duet, which is really a warning of enticing a woman to marry you by bribes. The female part is particularly striking with smooth and sassy sound, however Ewan gets the killer line of the whole album, (aside from the Yiddish poetry), when he sings, ’You love coffee, I love tea, You love my money, you don’t love me.’

The striking female vocals of Iona Smith return again on I’ll Take You Home Again Kathleen, the Irish Ballad. It is a lovely kind of duet though it’s at a slower pace and is more of a musical thought than a properly developed track, it is a slight intermission from the blues and brings us home to the British Isles, albeit briefly, as we return to North America on the next track.

Country Blues features really fantastic instrumentation, and a great story with whisky, women, and a haunted jail house. All fantastic inclusions in a song, however on this track the vocals got slightly too faux-americana for a young musician from West Yorkshire, but the banjo playing is an absolute joy, and never lacks energy and drive.

The whole album sounds as though you’ve taken a few steps back in time, and the best parts are the times when you are transported to the cold hardships of the USSR rather than the country back-waters of the USA. The final track Aisoun finishes this release as it began, with a fabulous instrumental accordion track which brings this musical journey to an end in a manner vaguely reminiscent of a haunted merry-go-round.

Tomorrow Might Be Monday is an intriguing set of tracks, and considering the cold-war polarity of the USA and Eastern Europe, (the two locations which seem to most categorise the album) it is completely cohesive as Ewan D Rodgers flicks seamlessly from rags, to blues, to ballads in a manner which really emphasises his versatility and musical talent. 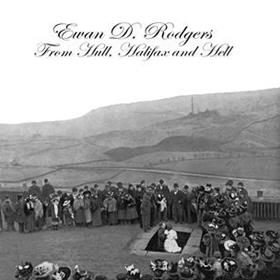