Firepit Collective - To the Lost 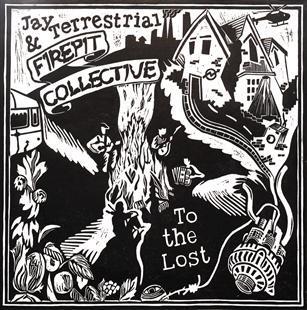 Jay Terrestrial on guitar, stomp box and vocals comes from a punk background and this is reflected in the rather aggressive guitar playing style on some of Firepit Collective’s tracks. This is starkly juxtaposed with some delicate classical and Spanish style playing. However, the issues close to his heart are common themes in folk. He performs regularly with Chezney Newman (bouzouki, banjo and vocals) and here is joined by guest musicians David Garner (fiddle), Jess Cahill (melodeon, hurdy gurdy), Jez Hellard (harmonica), Rosie Nobbs (lever harp), Chris Bowsher (spoken word), and Del Wilson (vocals).

Jay has a very laid back singing style, and while he may not have the best singing voice, he is passionate about many things and this comes across in the subject matter of the songs on this album.

This is quite a political album with traditional songs from anti-fascist Italy (Bella Ciao), the Spanish revolution (Ay Carmela) and an updated version of Johnny has Gone for a Soldier. Jay’s own songs also tend towards political themes - the album opens with a tribute to environmental protesters (Winter Mist) and ends with a song for New Age travellers (Ridgeway Downs).

Ay Carmela predictably features Spanish style guitar playing. The lyrics are quite sparse so the emphasis is on the instrumentation. Bella Ciao is Italian anti-fascist anthem. It has a strong driving rhythm and a much more punky feel in the vocals and accompaniment.

Several instrumental tracks are included on the album: the Durhamericana Set consists of two familiar reels from the North East of England cleverly merged with bluegrass. Jay’s own composition, Pelting Drove Reel, really shows off his skill as a guitarist, and features Jess Cahill on hurdy gurdy.

Some well-known songs have been updated - the North East shanty Hanging Johnny is merged with NailEmUp, a tune by Chezney Newman. As the song progresses, it becomes more relevant and even quite angry. Johnny Has Gone for a Soldier is an updated version of the familiar folk theme of love torn apart by war - in this version the soldier has gone to Afghanistan. The introduction on hurdy gurdy seems to emphasise the poignancy of the song. There are some lovely harmonies too. There is also more political comment in the spoken section, delivered by Chris Bowsher.

With so much politicial content, To the Lost could be dubbed a protest album after the manner of the protest songs of the sixties. A well-presented collection of songs in a range of musical styles.