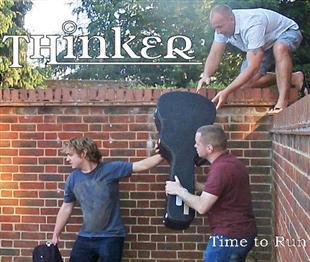 Time to Run is the second release from Thinker, a three-piece ’folk-indie’ band from Hampshire. The band is mostly a vehicle for the songwriting of lead singer and guitarist Charlie Bateman, who contributes to eight out of the ten tracks offered here.

The band’s acknowledged influences are English, Irish and Punk music. Their music is direct, raw and full of energy.

To achieve this rawness of sound Bateman is joined by Chris Edwards on fiddle and Stuart Davis on bass whilst Charlie also plays percussion on some of the tracks. Edwards fiddle playing is gutsy and one can detect the influence of not only traditional music from the UK but also from the United States. Davis’ bass playing is solid and steady but is very often lost in the mix.

This is not a refined set of songs. Most of the pieces are based on a riff that is insistently played by Bateman whilst Edward provides many of the hooks with a catchy fiddle tune that can so easily turn into an earworm.

Most of the songs circle around those perennial subjects of the songwriter, love and loss. Added to this mixture are a smattering of political songs which deal with such issues as bankers (Hate) or are a general call to arms (Tables Turn).

Bateman adds an organ accompaniment to Holding On, Holding Out inflating a gentle song of lost love into a four minute epic wall of sound. Although the idea is good, the resulting piece sounds muddy with each instrument competing for the listener’s attention.

Indeed, the production of the album is problematic throughout. On many occasions Bateman’s very pleasant voice is drowned in a too loud guitar and fiddle accompaniment. After thirty or so minutes of this, the ear becomes tired and starts to tune out of the songs a little.

If that happens it’ll be a pity as Thinker’s thrash-punk version of the old traditional warhorse, Tell Me Ma (also known as The Wind Blows High) is a great album closer. This joyful, life affirming song represents all that is best about the band.

Play it with the volume up to 11. One louder.

Released on Thinkermusic records on the 5th January 2015.