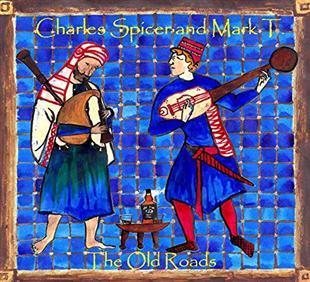 For once, there’s a case against the old maxim about not judging a book by its cover. The cover art of The Old Roads, showing two medieval players with their strings and pipes, alongside a rather more contemporary-looking drinks table, is perfectly accompanied by the musical content within.

For the non-musicians, the old roads is/are what Eastern Mediterranean musicians call the scales or modes upon which Charles and Mark’s tunes and songs have been constructed, but there’s a little more than musical scales to the package. In bringing their concept to life, Charles Spicer and Mark T have gathered together an intriguing array of authentic tunes and songs which have themselves made quite some journey, from pilgrimage routes or crusader’s journeys to the wanderings of minstrels and troubadours.

So it’s not only the scales which have travelled, but the tunes have come some way before finding themselves in the hands of these two musicians. They have passed through many hands and many arrangements before being nurtured and given a breath of fresh air.

All the songs and tunes are traditional or by that well known and highly prolific songwriter Anon, and arranged by the duo for their core instruments; Mark’s bouzouki joined by the cor anglais of Charles, itself made from a seventeenth century drawing of bumble bee pipes - all very authentic and realistic considering these are instruments which could have been found beside the Silk Road in those times.

With Saltarello, a fourteenth century jumping dance, the album gets off to a lively start and sets the scene for what’s to follow. Rather than being what could be viewed as a rather ancient collection, it comes across as very modern and only in reading the background of each piece does the listener get the full picture of the musical origin.

Traditional English songs are well represented amongst material from farther afield; in the Anglo-Scots border ballad Lord Ronald, you can see where Bob Dylan might have grabbed inspiration for his marvellous A Hard Rain’s A Gonna Fall, and fans of the Faustus trio will recognise the short version of When First To London, from its Somerset origins, which they interpreted as The Hostesses Daughter.

The Lailly Worm is positively modern in its origins although lyrically speaking of “taking a silver wand and giving the air strokes three,” there’s the familiar folk theme of magic and enchantment breaking through.

However, it’s perhaps in the tunes that listeners will find the most delight and unearth a few treasures. John Playford’s seventeenth century Dancing Master is a source mined for a couple of sets of tunes and there are takes on twelfth and thirteenth century material in Ja Nus Hons Pris - written by King Richard whilst imprisoned following a return from the crusades. We all know about Henry VIII and Greensleeves, but how many can hold their hands up to the knowledge of the Lionheart as a sensitive composer as he laments about no-one being able to enlighten him as to the cause of his sorrow?

The more conventional morris tunes which are combined to form The Manchester Cuckoo, whilst being totally English in their origins, are quite interestingly given a more exotic interpretation - one can’t help but be brought into snake charming territory by Charles’ work in this piece - and it’s a fine example of how traditional tunes can be interpreted and adapted for other societies and civilisations.

Whilst the splendidly jaunty Quant Je Voy Hiver Returner / Grimstock is the tune to a tongue-in-cheek song by minstrel Colin Muset, combined with another dip into the Playford files, there is an interesting set in Taqsim / Song Of The Ass / Personent Hodie which combines cultures and traditions around the celebrated Feast Of The Ass.

With The Old Roads, Messrs Spicer and T, have taken on an all-encompassing concept and package, adding an interesting dimension and another fascinating take on the music which falls under the folk umbrella.

Released by Circle Of Sound. 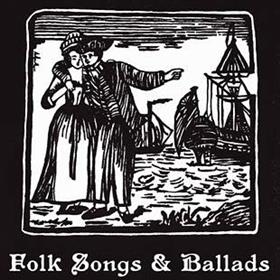