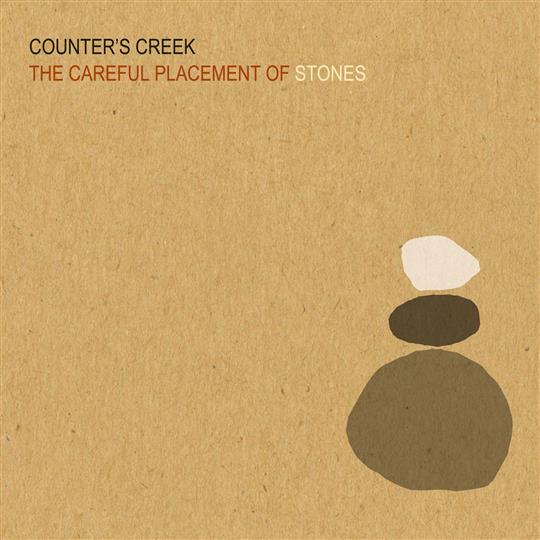 Counters Creek is Jonathan Taylor (whistles and piano), Tom Newell (fiddle, octave violin, mandolin, jew’s harp and banjo), Moss Freet (guitar) and Andy Tween (drums and percussions), a new London based jazz-folk collective of musicians with different backgrounds. The Careful Placement of Stones is their debut album, an intriguing collection of original tunes with a refreshing sound, blending the musical tradition of the British Isles with grooves from Western Africa and Eastern Europe.

The album kicks off with a series of modern sounding and atmospheric tracks, culminating in Beloved, a haunting low whistle led track, a bridge to the second and more energetic part of this release. Right in the middle of the album there are the three most striking tracks: the lively jig Once Brewed, Twice Brewed, the dynamic Fish Out of Water / The Walthamstow Reel and especially the sublime Richmond / Fidel’s Farewell / The Path of Least Resistance in which Newell’s sensitive fiddle playing reaches its highest peak of expressiveness.

The album closes with a tribute to Austrian composer Hanns Eisler. An Den Kleinen Radioapparat is one of his tunes, written in 1942 during his exile from his native country occupied by Nazi troops.

Taylor’s whistle playing gets the headline in the majority of the tracks, especially the ones in which he plays low whistle. However, every member of the quartet has his own voice in these twelve tracks: Newell’s versatility makes the perfect musical partner for Taylor’s whistles out of him, Tween’s jazzy and syncopated drumming adds an exotic touch to the tunes and Freet’s guitar envelopes everything in intelligent arrangements. Algebra is the best example of this mature musicianship with its experimental but catchy setting in which the different features of the band’s peculiar sound are effortlessly demonstrated.

The process of composing, selecting, combining and arranging the tunes for this album has been described by Taylor as placing stones on the grass to obtain an harmonious effect, something connecting the old Zen and Celtic cultures, and there is no better allegory for this highly recommended release merging so many elements of different traditions in such an elegant and smooth way.

Released on CD and digitally on 5th December 2019, recorded at Porcupine Studios and at the University of West London.

1. Ryme Intrinseca / Westward Ho!
2. Not All Those Who Wander Are Lost
3. Algebra
4. First Snowfall / The Lord of Misrule
5. Beloved
6. Once Brewed, Twice Brewed
7. Richmond / Fidel’s Farewell / The Path of Least Resistance
8. Fish Out of the Water / The Walthamstow Reel
9. Ullapool
10. Caer Llan / Besselheim / The Ballymagarvey Wedding
11. Setting Stones / Since Feeling is First…
12. An Den Kleinen Radioapparat