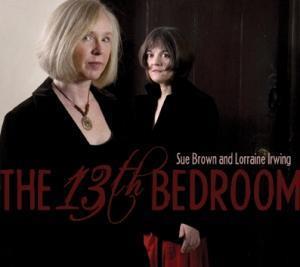 Sue Brown and Lorraine Irwing’s second album The 13th Bedroom comes 15 years after their first: they obviously wanted to make sure they got things right, and indeed they have. The album offers a fine collection of delicately beautiful a cappella harmony singing alongside songs with the subtlest of accompaniment.

A first glance at the track listing may lead the listener into thinking the record is a collection of familiar folk songs, but do not be deceived. Whilst the titles may be familiar the duo have made the songs their own - the opening track The Derby Ram is a prime example of this, with a verse added by Sue. Other well known titles include Betsy Bell and Mary Gray - where a sudden ending illustrates the shocking subject matter of the song, and Go From My Window - a song disguised as a lullaby but actually meant to warn the lady’s lover that her husband is at home.

Less familiar tracks include Nay, Ivy, Nay, an ancient text set to music by Lorraine, about the conflict between holly and ivy. The arrangement is stark, just solo voice and dulcimer, giving it a slightly sinister feel. The ghostly Lady Gay is accompanied by the shruti.

A surprise inclusion is John Martyn’s Don’t You Go - Sue and Lorraine’s version is stunning, and there is real pleading in their voices.

The title of the album comes from the striking song Mr Fox. Although not a traditional song, it deals with the familiar subject matter of a lost ball, child abduction, a forbidden room, and a young girl whose curiosity gets the better of her.

The album ends in stirring style with Canaan’s Land - a song from the Sacred Harp tradition.

Sue and Lorraine’s voices combine to form a texture like fine lace - this second album was certainly worth the long wait!